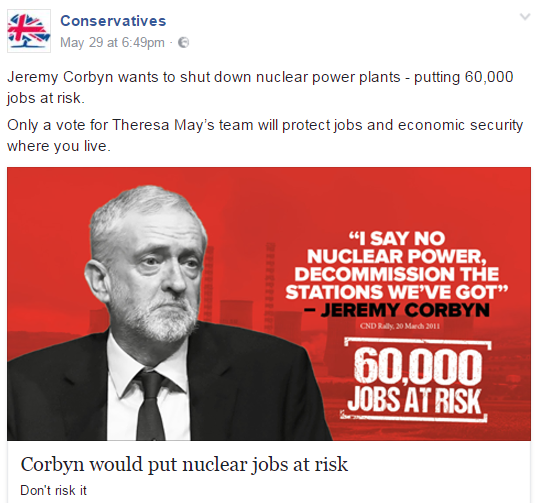 The world was stunned when Donald Trump pulled the United States out of the historic Paris climate agreement last week, but Britain’s major political parties haven’t been talking much about it on Facebook.

According to an analysis of nearly 900 Facebook ads by the Bureau Local, neither Labour nor the Conservatives have mentioned climate change in their promotional material on the world’s biggest social media platform.

The data, obtained via the ‘Who Targets Me’ web browser extension, shows the Liberal Democrats are in fact campaigning on the issue, launching  22 climate-centric Facebook ads since April 28.

Labour are instead attacking Theresa May’s plans to hold a vote on fox hunting, while the Tories are using Hinkley Point C as evidence that they support jobs in the nuclear industry.

The SNP, Greens and UKIP were not included in the analysis, which is not especially comprehensive.

The stats show that out of 135 Facebook ads, Labour have only made two on environmental issues — both on fox hunting.

Out of 148 targeted adverts, the Conservatives’ only marginally-related promo was aimed at the nuclear industry hubs such as Copeland, where it won a famous by-election victory earlier this year.

The Liberal Democrats on the other hand have pumped out 22 adverts on the topics of renewable energy and climate change, including last week’s late addition on the Trump decision.

You may not be shocked to learn that climate change has not been a major election issue these past few weeks.

Surprise question at the BBC’s debate aside, the environment has rarely featured in a political conversation understandably dominated by national security and taxes (but weirdly not Brexit).

But with Trump’s anti-climate agenda in full-swing, the world heating at a record pace, and an urban air pollution crisis dominating the country’s editorial pages, you’d really expect something more than a measly 4% from a party at only 7% in the polls, and nothing from the majors.

For more on this, read our editor’s always-timely piece on How The UK Stopped Talking About Climate Change.