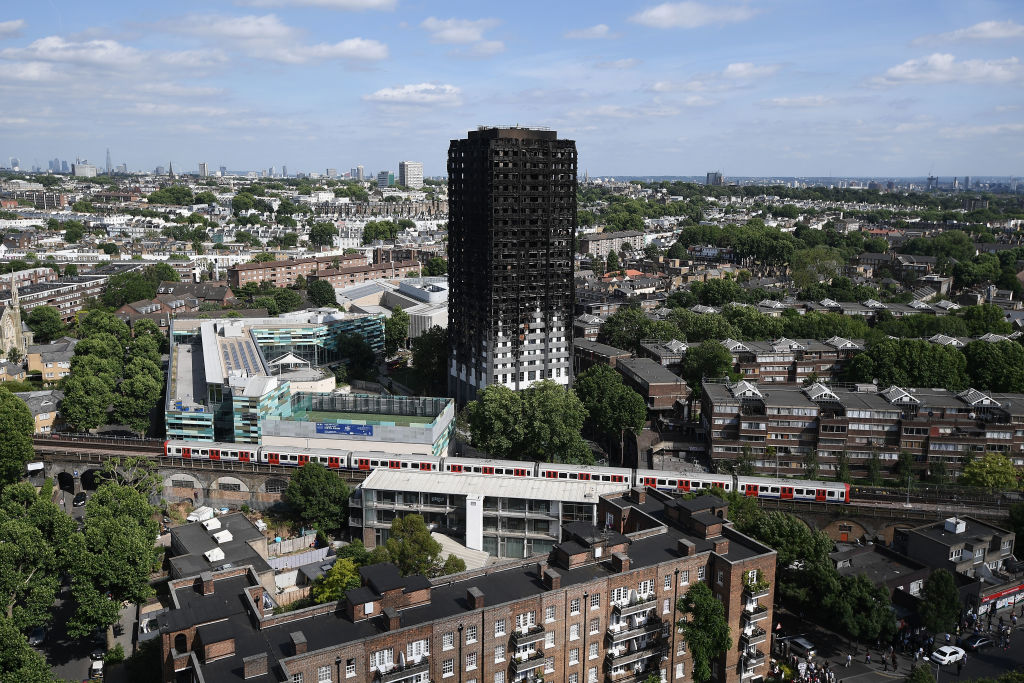 A government-backed initiative to cut ‘red tape’ after Brexit was looking to reduce the ‘burden’ of EU building regulations just weeks before the disaster at Grenfell Tower, according to leaked documents obtained by Unearthed.

Rules including EU directives covering energy efficiency and fire safety standards were even being discussed with industry and other stakeholders on June 14 — the very day of the tragedy, which claimed at least 79 lives.

A policy briefing produced by lobbying firm Hanbury Strategy for the Red Tape Initiative, a cross-party project chaired by Conservative MP Sir Oliver Letwin and until recently involving Michael Gove, lists five EU building regulations that could be amended or repealed after Brexit.

The Energy Efficiency Directive, the latest version of which the UK is lobbying to weaken at an EU level, and the Energy Performance of Buildings Directive also feature in the document as potentially ‘burdensome’ laws.

The Red Tape Initiative is one of their few known clients.

Nick Tyrone, Director General of the Red Tape Initiative, told Unearthed: “We hired Hanbury to do us a ‘first look’ at what possible regulation from the EU might be relevant to the sector.

“The one they did for us had a wide range of items, most of which the sectoral panel rejected as items to discuss any further.

“This is what we expected of the process and is no fault of Hanbury’s – it is hard to know what the sector’s demands will be beforehand.”

He said the purpose of the project was “to find things that would find cross-party and cross-spectrum support” and that it is “not looking to cover anything controversial that would fail to gain such support, such as health & safety, employment rights or immigration”. 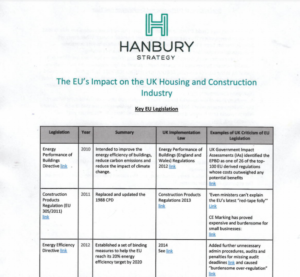 The briefing is written on Hanbury letterhead and entitled ‘The EU’s Impact on the UK Housing and Construction’.

The document’s metadata dates it to May 10th of this year, and suggests it was co-authored by Alex Hackett, a researcher at the Red Tape Initiative who used to work for climate and eurosceptic MP Bill Cash.

In that column it refers to a Daily Telegraph column written by climate and eurosceptic Christopher Booker that describes the Construction Productions Regulation as “red-tape folly.”

The document then provides what it calls a ‘Brief critique of EU Housing and Construction Red Tape’ in which it says building and housing regulations have “been identified as a cause for concern” and cost councils and housing developers millions.

It closes by offering a glimpse at its ‘Next Steps’ which boil down to providing more in-depth analyses of the costs of EU red tape, and the potential savings of cutting it.

Tyrone said “the only [law] from the list we are actually taking forward into the next stage of the process being the Mortgage Credit Directive, something which can have an adverse affect on people lower down the housing ladder.”

The Red Tape Initiative was launched back in April with the purpose of creating a consensus on which regulations could be removed once the UK leaves the EU.

Its funders are not public, and are referred to simply as “business donors.”

Upon introducing the project, its chairman Sir Oliver Letwin said housebuilding would be one of three priority areas to be targeted in the deregulatory drive.

The first area the RTI is looking at is #housing https://t.co/flmJRBlvVT

Letwin said they were planning to launch around 10 inquiries to seek views on what EU regulations could be jettisoned.

He also said Business Secretary Greg Clark wrote to the initiative, offering the cooperation of his department.

Tyrone described the project as “looking to locate both the EU directives and regulations that businesses find cumbersome as well as the ones they feel we cannot do without, in league with our main stakeholders, which include the TUC, the CBI, the FSB, the IOD and the British Chamber of Commerce.”