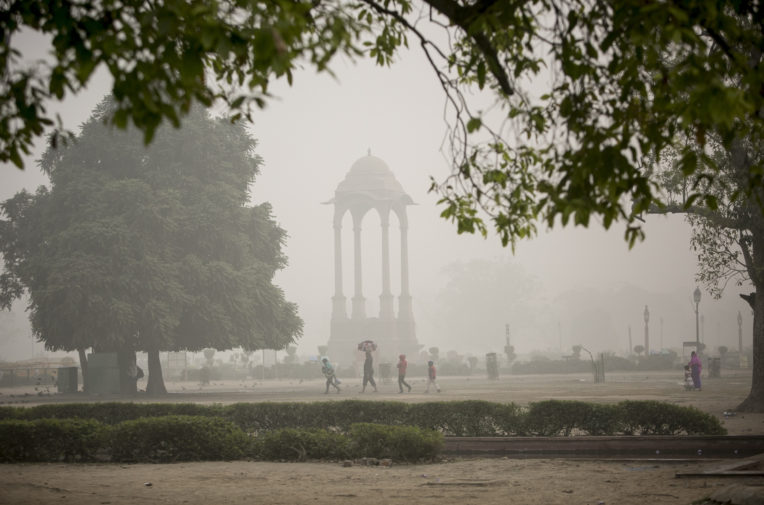 ‘Modern air is a little too clean’: the rise of air pollution denial

It's a thing and it's coming from people in power

‘Modern air is a little too clean’: the rise of air pollution denial

It's a thing and it's coming from people in power

Despite report after report linking air pollution to deterioration of the lungs, heart and brain, Professor Robert Phalen believes the air is “too clean” for children.

After all, everybody needs a bit of immune-system-boosting dirt in their lungs.

“Modern air is a little too clean for optimum health,” he told the American Association for the Advancement of Science (AAAS), one of the world’s largest scientific societies, in 2012.

“My most important role in science is causing trouble and controversy,” he added.

Now the director of the air pollution health effects laboratory at the University of California, Irvine, is set to be appointed as a scientific advisor by Trump’s Environmental Protection Agency (EPA).

But Phalen isn’t alone. Pollution denial is starting to appear outside the US, in countries where the air is much more toxic.

Denial in the US

Last week, the Washington Post and E&E News published a list of people expected to be appointed as new scientific advisers by the EPA.

Some have operated within groups that have long denied climate change science. And now they are doing the same with air pollution.

For example, Stanley Young is a statistician at climate denial group the Heartland Institute. He wrote in a statistical blog in 2014 that “the science literature… is on the side that increased ozone and PM2.5 are not associated with increased deaths”. (He also states that temperature rise “is good for humans”.)

It’s not just the advisers either. As people donned masks in Delhi last week, Steve Milloy, member of Trump’s EPA transition team and Scare Pollution author was asking the twittersphere:

Where are the bodies? Where is the asthma? No reports! https://t.co/scuw0Uw4ME

Milloy is right that nobody dies purely from air pollution (hence nobody has it on their death certificates), but there is broad scientific consensus that it is a causal factor that shortens lives.

The science is significantly more established than that on climate change, according to Dr George Thurston, co-author of the World Health Organisation’s Global Burden of Disease air pollution report.

But the sceptics are not just in the US.

For the last two years Prakash Javadekar has been India’s environment, forests and climate change minister.  Despite living in a country where the air is now believed to be more deadly than in China, Javadekar is sceptical about air pollution.

In May last year, he said a World Health Organisation report which listed over 30 Indian cities among the hundred most polluted globally was “misleading”. A month later, he dismissed research by the Indian Institute of Tropical Meteorology (IITM) and the US National Centre for Atmospheric Research looking at air pollution and mortality as a “so-called article” that was “incorrect” because it is not based on “ground study”.

And in February his colleague Anil Madhav Dave dismissed the findings of the State of Air Global Report, which attributed more than 100,000 yearly deaths to ozone pollution.

He said: “It is exceeding in some places, some day. But it is not a routine phenomenon. You cannot link early deaths to ozone.”

“Every time a new study is published the question is raised as to whether it is backed by solid epidemiological evidence on the ground in India,” argues Bhargav Krishna, an air pollution expert at the Public Health Foundation of India.

“This is relevant as each time a question is raised, a debate ensues on the validity of the data, thereby delaying action. While the evidence in India could certainly be strengthened, there is a strong enough evidence base to take action now.”

India’s  environment ministry would not have to look very far for homegrown assessments. It could go to the health ministry, in fact.

Two years ago, it published a landmark report (pdf) (that Krishna contributed to).

The report opened by recognising evidence that air pollution is “the world’s largest single environmental health risk” and “a leading cause of death and disability in India”.

And it concluded that:

“We believe that reduction of both emissions and exposures are important to protecting public health… we very much recommend reduction of emissions as much as possible to reduce overall exposure”.

At least in Poland, where the air in some cities can be more toxic than in Beijing, government ministers are roughly on the same page.

“Let’s not give in to demagogy, pollution is sometimes higher due to climate issues, but this is definitely not the reason why someone will live shorter” he told a transport conference in February.

But his fellow minister in the health department backed him up, albeit for different reasons. He chose instead to tell people to quit complaining because there are bigger problems to be worrying about.

Calling toxic air a “theoretical problem,” he argued that “our lifestyle is much more damaging – someone who breathes in air smoking a cigarette, with fumes and everything that comes with it, is in a position in which complaining about poor air quality is not credible at all.”

In Poland, where coal is a disproportionate contributor to toxic particulates  (compared to other European countries where transport is blamed more), what the energy minister says matters.

And it has become a sticking point, according to Lukasz Adamkiewicz, who is part of a team of scientists developing an air quality index for Warsaw.

He says: “A huge majority of the people in positions of power at institutions – ministries, universities, hospitals – in Poland understand that air pollution does affect human health. They generally agree that we need to act, but they might not support policies openly if it’s directly connected with coal restrictions”.

In India and the US too, there are concerns that these narratives are having a detrimental impact on efforts to cut pollution.

He is particularly concerned about the impact on Indian cities outside the capital; most of those in crisis are not even covered by the government’s air quality monitoring system.

“The nature of division between central and state government means that nobody is taking any responsibility. There are great swathes of the country facing air pollution that is just as bad, sometimes worse, than Delhi, but nobody is even talking about it.”

Meanwhile, in the US, Janice Nolen, assistant vice president at the American Lung Association (ALA), has already been noticing a difference since the Trump administration came into power.

The ALA is part of a coalition of groups now suing the EPA for delaying the implementation of smog standards. Nolan says that it is “unusual” for the government to miss the routine deadline.

“We are seeing a lot of things that were routinely done under previous administrations not being done under this one,” she says.