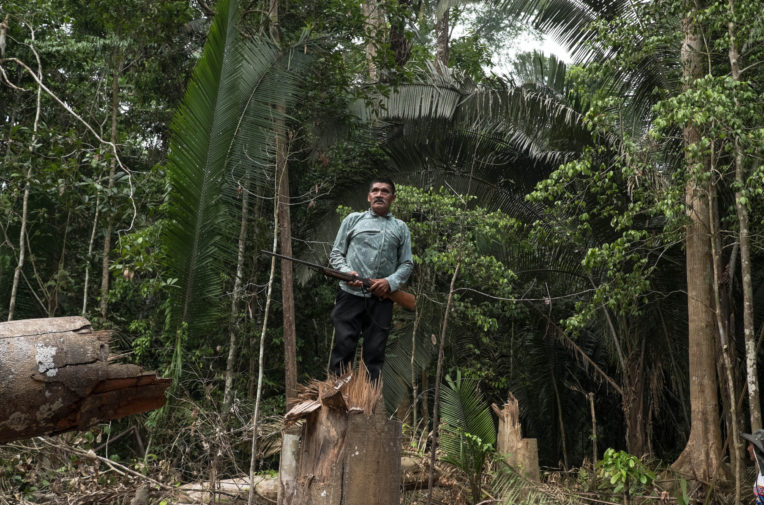 In the Brazilian Amazon, Indigenous people deal with a violent new world

In the Brazilian Amazon, Indigenous people deal with a violent new world

With worn single barrel shotguns slung over their shoulders, two Indigenous men tread quietly through the thick Amazon forest of their land, checking for illegal activity.

They say that since 2015, their territory – where they live with around 40 other fellow Karipuna in Brazil’s north-western state of Rondônia – has been increasingly targeted by illegal loggers and land grabbers.

The atmosphere is tense. In this unpoliced part of the Amazon, illegal extractive gangs that operate in the region are known to be armed and violent, usually connected to large, powerful criminal networks.

As they descend a hill, suddenly the forest opens up into a large clearing. It’s a scene of devastation – dozens of large trees have been cut down, undergrowth has been set on fire.

The tribesmen search the area for clues of who has been here and when. They find discarded food packaging. They say it must be from the loggers.

A spike in violence against Indigenous people and rural workers in the Brazilian Amazon has been accompanied by increasing deforestation in protected areas.

It comes as funding for Brazil’s indigenous agency, Funai, was cut by 44%, agency officials told Unearthed.

According to the Imazon institute, deforestation in Amazon conservation units rose 22% between August 2016 and July 2017.

Amid economic downturn, overall Amazon deforestation dropped 16% in the same period according to Brazil’s Programme for the Estimation of Deforestation in the Brazilian Amazon (Prodes), but only after growing by 27% and 24% two years previously.

Deforestation remains significantly above its 2012 low.

Meanwhile, the number of deaths from conflicts over land and resources stands at 64 from January until November 2017, compared to 61 in 2016, 49 occurring in the Amazon according to watchdog Comissão Pastoral da Terra (CPT).

There is hardly any productive land left, so the race for land is on, at any cost

Experts blame Brazil’s economic and political crises for violence and intrusions on protected lands. They say loggers and land grabbers are engaged in a violent scramble for land and resources, enabled by deep cuts to Indigenous and environmental budgets.

These groups are emboldened by a powerful farming lobby whose influence has grown over the last decade and especially since President Michel Temer took office in 2016.

Cleber Buzatto, executive secretary of Brazil’s Indigenous Missionary Council (Cimi), tells Unearthed: “The dominance of agribusiness in government, with the measures they are pushing, creates incentives and a sense of protection for those who commit these crimes.”

At a global summit in Bonn, Germany last week, international leaders agreed for the first time to create a platform for Indigenous people to participate in climate change talks.

Unearthed visited the Karipuna Indigenous territory in Brazil’s Amazon state of Rondônia on the “arc of deforestation,” the agricultural frontier advancing into the forest.

Since 2015, tribespeople say their land is increasingly targeted by loggers and land grabbers.

“The invaders are marking their territory, they want to occupy and take our land,” says Adriano Karipuna, one of the tribal leaders as he patrols his land to check for illegal activity

Federal prosecutors began working on a criminal case in August involving the Karipuna’s land, after Adriano filed a complaint that he was receiving threats to kill him and his children.

Around 40 Karipuna tribespeople live on the 153,000 hectare territory demarcated by Brazil’s government in 1998. Most of the tribe died from diseases following contact with Amazon settlers in the 1970s.

“Given the small numbers, both from the cultural and physical point, this tribe is at risk of genocide if strong measures are not taken immediately to stop the invaders, warns Buzatto.

Proportionately, Rondônia is Brazil’s most deforested Amazon state. From 1988 to 2017, the state lost 59,113km2 of forest cover, driving violent conflict over what remains.

“There is hardly any productive land or trees left, so the race [for land] is on, at any cost,” says Rondônia CPT coordinator Maria Petronila. She adds that there have been 15 land conflict killings here this year.

Deforestation rates remain high. Rondônia deforestation rose by 31% in 2015 and 54% in 2016, before falling slightly by 9% this year as the battle over what remained intensified.

Between 2012 and 2015, Imazon data shows, the state had three of the five most deforested Amazon conservation units. One was an area, which borders the Karipuna land.

The cuts to the indigenous agency have been felt on the ground – allowing the loggers to move in.

A support base from Brazil’s National Indigenous Foundation (Funai) on the Karipuna territory was abandoned. Funai did not respond to an email asking for comment.

According to data obtained by Cimi from Brazil’s service for the protection of Amazonia (Sipam), a government body, 1,046 hectares were deforested from the Karipuna land from January 1st until August 13th 2017, compared to 586 hectares in 2016.

Daniel Lobo, a federal prosecutor in Rondônia’s capital Porto Velho working on the Karipuna’s case says much of the lumber heads first to irregular sawmills in nearby União Bandeirantes district.

“In this region logging is more profitable than drug running and with much less risk,” he says.

In August, Lobo worked on a case where Brazil’s Federal Police arrested members of a gang thought to have made BR$20m (US$6.15) profit from illegal logging in protected forest areas and Indigenous lands in Rondônia.

Among those arrested were local businessmen and military police. He says political connections are common for illegal logging gangs.

According to Lobo, the wood ultimately goes to Brazil’s industrialised south or abroad. He blamed an easily fraudable wood registry system and lack of resources for inspections.

“You have to protect producers in Brazil. You can’t demarcate land just because an anthropologist said that Indians were there 200 years ago.”

In May, thirteen members of the Indigenous Gamela tribe in the north-eastern state of Maranhao were hospitalised following a vicious attack by local farmers with guns and machetes in a bloody land dispute.

The incident led UN and inter-American Indigenous experts in June to warn that “the rights of Indigenous People are under attack in Brazil”.

Back at the Karipuna Indigenous territory, the tribesmen return from their scouting mission to check for the latest signs of illegal activity on their land.

“My greatest fear,” says Adriano Karipuna, “is that we will be expelled from our land.”