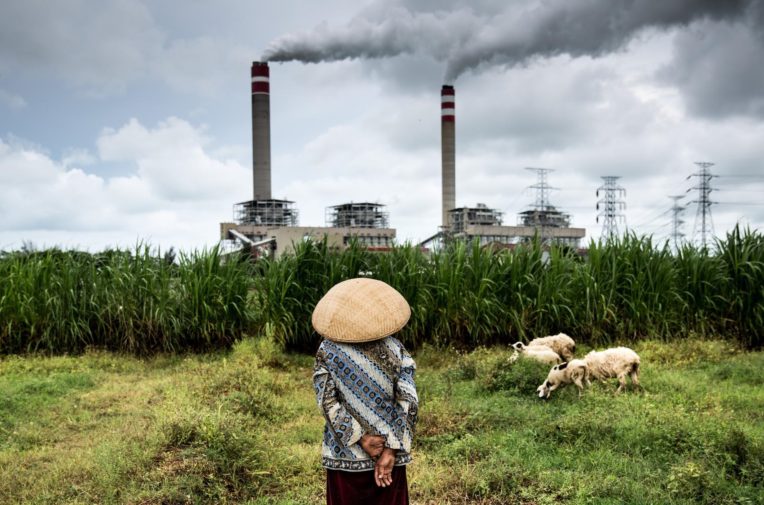 Can negative emissions really save the world?

The controversial technology is seen as integral if we are to keep to global warming to within 1.5 degrees. But will it work?

Can negative emissions really save the world?

The controversial technology is seen as integral if we are to keep to global warming to within 1.5 degrees. But will it work?

Today, climate scientists at the UN’s Intergovernmental Panel on Climate Change warned that the world needs to radically reduce greenhouse gas emissions to keep the planet within 1.5 degrees of warming by the end of the century.

The boss of a company which has pioneered a way of sucking carbon emissions out of the air wants you to know he’s here to help.

“We’re ready to go,” says Steve Oldham, CEO of Carbon Engineering. “The technology is ready to be fielded at scale.”

Scientists at the IPCC seem to agree. In scenarios mapped out by the organisation for how to keep the world within safe, non-civilisation-ruining, levels of warming, negative emissions feature heavily.

The body has set out that around 12 billion tonnes a year of carbon emissions will need to be captured by 2050, if the world is to meet targets set out in the 2015 Paris agreement. That’s about a third of today’s global emissions.

Right now, the amount of carbon in the atmosphere is at dangerous levels. Six months ago it was found to have surpassed 410 parts per million for the first time in recorded history.

But much of the new carbon capture technology is untested. While some argue that the world’s first priority should be dramatically reducing greenhouse gas emissions, rather than finding ways to pump them out with impunity.

Unearthed spoke to scientists, business leaders and campaigners to try to answer the question: can negative emissions save the world?

Located on a former toxic-waste site near a volcano about an hour north of Vancouver, Carbon Engineering’s headquarters contains an array of machines which suck around one tonne of carbon out of the air each day.

The company, which has secured backing from Bill Gates, takes this carbon and turns it into what Oldham describes as an “almost carbon neutral” fuel which can be used by today’s cars.

That’s the business model: take carbon out of the air, turn it into a fuel, then repeat. Oldham calls these processes “two essential tools” to help tackle climate change.

Another carbon capture company, Climeworks, based in Switzerland, claims its main plant takes between 900 and 1,000 tonnes of carbon out of the air every year. This carbon is then sold to agricultural firms and the beverage industry. Climeworks wants to capture 1% of global CO2 emissions by 2025. That’s a lot of fizzy drinks.

Some scientists are also touting BECCS, or bioenergy with carbon capture and storage, another largely untested process which mimics photosynthesis to create electricity. That is, you plant a crop, burn it for energy, capture the emissions from burning it, then go again.

All this seems like a magic solution for our changing climate: a way of managing the transition away from fossil fuels without having to change the economic system. No wonder oil companies love it.

But without significant public investment, it’s likely that Climeworks and Carbon Engineering won’t develop into the major companies they hope to be.

“Companies like ourselves and Climeworks are offering feasible solutions that are out there, so now is the time for policy,” says Oldham.

“The benefits of addressing climate change are everybody’s problem and therefore nobody’s problem. There isn’t an economic case for capturing CO2 today. You need to create a product and sell it. That product for us is liquid fuel and we’re progressing with that. But to do negative emissions, to sequester and store CO2: that needs policy. It needs governments to say the value of storing CO2 is X dollars per tonne. That doesn’t exist at scale today.”

Some kind of internationally introduced carbon tax, a policy long mooted by climate experts, could help make carbon capture technology more likely. But for the time being both companies are essentially making a bet.

Burning down the house

Even if there was an economic incentive to capture all this carbon, should we be pushing to do it? Where would you store it? How would you stop it leaking out?

In a paper looking at what role negative emissions should play in meeting the Paris goals, the European Academies’ Science Advisory Council, a group made up of all the different national scientific academies in EU member states, concluded that the technologies “offer only limited realistic potential to remove carbon from the atmosphere and not at the scale envisaged in some climate scenarios”.

Payal Parekh from 350.org, a campaign group founded by journalist and activist Bill McKibben, argues that it’s dangerous to rely so much on new technology.

“If your house was burning, you would first try to put out the fire, rather than devise new technologies that are untested to undo the damage while the fire was raging,” she says.

“To keep warming below 1.5 degrees or less, we first need to keep fossil fuels in the ground, period. Negative emissions of any kind, natural or technological cannot offset our current carbon trajectory.”

350.org and other campaign groups are calling for a more radical transformation of the fossil fuel powered economy.

Some research has argued that it would be possible to limit warming to 1.5 degrees, without BECCS and extensive carbon capture.

Detlef Van Vuuren, a senior researcher at the Netherlands Environmental Assessment Agency, is the lead author of a study published earlier this year in Nature Climate Change which argued that lifestyle changes combined with extensive investment in renewable energy could see the world put a cap on global warming.

“We wanted to give a new insight into mitigation pathways that could be looked at by policymakers,” he explains.

“The advantage these alternative pathways is that they have other benefits, as well as mitigating climate change. For example, less meat consumption would mean a healthier society and it would give over more land for reforestation.”

Van Vuuren’s scenarios makes some optimistic assumptions about the development of green technology and the shift toward a plant-based diet. He acknowledges it’s difficult to make clear projections about the future.

“We’re assuming biodiversity protection and some improvement in yields. But ultimately, we don’t know. We don’t know what the world will look like in 2050. None of us do. It’s a risk.”

Oldham tells me he understands criticism of carbon capture projects.

“I’d be delighted if negative emissions were never needed,” he insists. “However, we need to produce better tools to allow us to handle different situations. It is challenging to get everyone in the world to change their behaviour. Everybody could get an electric car, but not everyone has $30,000 to buy a new car. So asking people to change their behaviour is very difficult. It’s far better to provide two tools.”

The world is “nowhere near on track” to meet the target of limiting global warming to 1.5 degrees. That’s the overriding, in your face, keep you up at night message from today’s IPCC report. Something’s got to give.

Asked if he buys the line from Carbon Engineering that it’s “ready to go”, Van Vuuren deflects slightly. He argues that the biggest challenges for BECCS and other forms of carbon capture are not technological

“The challenge,” he says, “is that there’s no widespread support for these measures.”

More on our changing climate