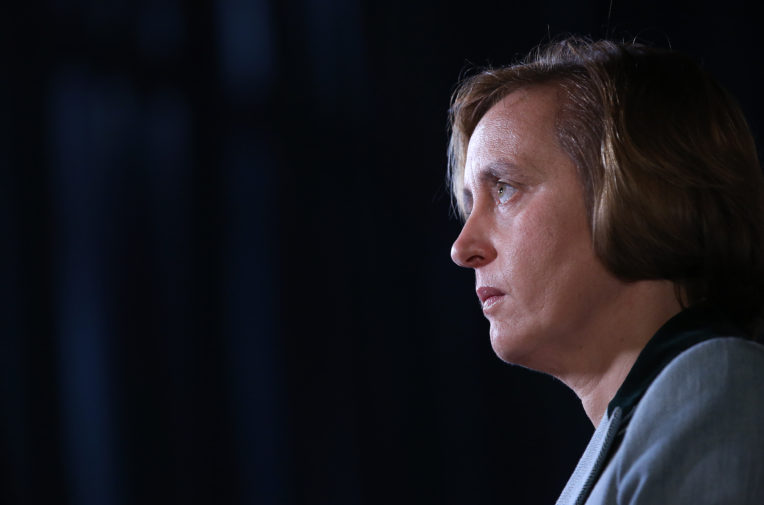 As they seek to gain ground in the upcoming European elections, Germany’s far-right has a new target: a Swedish school-girl.

The emergence of teenage climate activist Greta Thunberg has seen the Alternative für Deutschland (AfD) party ramp up its focus on climate change, according to an Unearthed investigation with counter-extremism organisation the Institute of Strategic Dialogue (ISD).

At the invitation of Karsten Hilse, the AfD’s environmental spokesperson, a clutch of controversial scientists and speakers are expected to launch an attack on mainstream climate science at an event in the heart of the German parliament.

It coincides with a surge in AfD social media posts on climate, according to data from the ISD.

Data from the Institute of Strategic Dialogue

The event is being publicised by a German-based political outfit called the European Institute for Climate and Energy (EIKE), with which all of the event’s speakers have a previous association. The think tank’s vice-president also advises Hilse.

The move to challenge the scientific consensus on climate change is relatively new to the EU, but has a storied history in the US — and there is evidence of ties to groups across the Atlantic.

EIKE is known for its annual climate conference, which is co-sponsored by the Heartland Institute, a US think-tank which has long financed projects which appear to undermine public confidence in climate science, and the US Committee for a Constructive Tomorrow (CFACT), another climate sceptic conservative organisation.

EIKE also shares an address with CFACT Europe, a group which was set up by current EIKE president Holger Thuss.

An Unearthed analysis of financial disclosure forms in the US has revealed CFACT Europe received financial support from its American namesake.

Though Heartland and CFACT have historic ties to the fossil fuel industry, transparency campaigners say it is now hard to identify the sources of their income, much of which comes from trusts and foundations which do not have to reveal the source of their donations.

Thuss told Unearthed that CFACT Europe “no longer exists,” and that it was effectively – though not formally – rendered defunct in 2013.

Tuesday’s event coincides with a surge in AfD digital communication on climate matters, according to exclusive data from ISD.

Data from the Institute of Strategic Dialogue

Where the party mentioned climate change on its social media channels fewer than 300 times in 2017-18, that figure has more than tripled over the past year, with a particular focus on Greta.

AfD candidates for the EU parliament elections, in which the party is expected to make major gains, have called on her to seek treatment for her ‘psychosis’ and – without irony – likened her to Nazi youth.

Hilse himself has been found circulating climate denial material at a Berlin climate school strike in March.

The controversial politician – who leads on environmental issues for the party – triggered laughter in the Bundestag last year when he described man-made climate change as ‘heresy’ and called for an end to the energy transition.

But the AfD’s fresh focus on climate change appears based in part on a longer-term relationship with a previously little-known German think tank, EIKE, whose vice president Michael Limburg advises Hilse.

Indeed Limburg previously ran as an AfD candidate himself and was a key member of the far-right party’s climate and energy working group.

Though EIKE denies supporting any political party, it is publicising Tuesday’s event on its website, drawing attention to its relationships with the speakers, all of whom have spoken at the group’s climate change conferences.

The website post had claimed one speaker, Viscount Monckton, “led several actions by EIKE and CFACT Europe” but Thuss changed the text after he was contacted by Unearthed, saying it did not make sense and Monckton is “not even a member of our organisation.” He is now described as “well known to friends of EIKE.”

Ulrich Mueller, an analyst at LobbyControl, which campaigns on lobbying and transparency issues in Germany, said: “There are close relations between EIKE and the AfD. People from EIKE are very active in the AfD and influence its positions on climate change and energy policy. In general EIKE is not very influential in the German public as a whole but the AfD provides an opportunity for them to spread their messages.”

EIKE itself has extensive ties to prominent conservative think-tanks in the US, in particular, the Heartland Institute which co-sponsors the annual climate denial conference hosted by EIKE.

Heartland’s fellows feature on the ticket, just as EIKE’s top experts have addressed the Heartland conference, the group lists EIKE’s Thuss on the ‘who are we’ page of its. Though it says EIKE is connected to Germany’s mainstream parties it makes no reference to the its ties to the AfD.

Speaking to Unearthed, Thuss declined to say if the public association has a financial component. A spokesperson for Heartland told Unearthed the group has “worked closely with EIKE over the years, and have often participated in each other’s climate conferences.”

In 2010, another climate-sceptic and conservative think tank in the US, the Committee for a Constructive Tomorrow (CFACT) gave nearly $15,000 to its European chapter CFACT Europe. The payment was acknowledged by Thuss on a call with Unearthed.

CFACT Europe, which was co-founded by EIKE’s Thuss, had previously described itself as a ‘founding member’ of EIKE, and CFACT CEO Craig Rucker told German outlet Monitor: “we are here to support EIKE in every possible way”.

A spokesperson for CFACT told Unearthed the group agrees with EIKE’s mission “to raise awareness of accurate climate science.”

EIKE and CFACT have also organised conferences together. Of EIKE’s ties to Heartland and CFACT, Thuss said: “We maintain no organisational ties to them, we are personal friends.”

Both Heartland and CFACT have historically received money from business interests in the United States, including major fossil fuel companies like ExxonMobil and the foundations run by the industrialist Koch brothers and Trump-backing Mercer family.

The paper trail showing decades of financial support for Heartland from Koch and Exxon, however, dried up several years ago.

The Mercer foundation continues to disclose that it gives millions to the Heartland Institute.

Documents leaked to climate investigations website DeSmog in 2012 detailed the role Heartland played in bankrolling projects which cast doubt on mainstream climate science, including high-profile climate sceptic bloggers and a schools programme. Heartland declined to comment, and said the documents were “stolen, not leaked.”

Funding data for these groups shows their primary source of income derives from non-profits like the DonorsTrust and Donor Capital Fund, groups which are not required to declare the ultimate source of the cash they distribute to conservative causes.

Harvard professor Naomi Oreskes told Unearthed: “One problem is that it is very difficult to know what the fossil fuel companies are doing.  It has been shown that in the past, ExxonMobil funded think tanks and other organizations that promoted misinformation or disinformation on climate change, often under the guise of ‘philanthropy’. Are they still doing so? They say they are not, but we really don’t know.

“My view is that ExxonMobil and other fossil fuel companies should open their books to an independent audit.  Then if they have truly moved past denial, we can thank them and move on.“

Which brings us back to Germany.

Whilst closing coal plants has long been controversial, the science of climate change – and the need to address greenhouse emissions – has rarely been contested in Germany. The AfD’s latest tactics appear designed to change this.

Under German transparency law, EIKE does not need to disclose its donors. The AfD meanwhile has come under fire for receiving support from foreign actors, including a well-funded leafleting campaign courtesy of a mysterious PR firm in Switzerland.

Whilst funding remains vague – the AfD failed to respond to an Unearthed question designed to give them the right of reply – one thing is clear: climate – especially in the age of Greta – has become an important part of the AfD’s political platform.

The party has mentioned the Swedish teen on its Facebook pages nearly 800 times, often suggesting that the climate movement is a cult and its leader.

And their elected officials echo this line of attack, with AfD MP Frank Pasemann tweeting: “This is not a ‘woman of the year’ but at best a teenager with autistic prehistory who is burned by her ‘advisers’ and by willing MSM as a new icon for the ‘climate church’.”

Jakob Guhl, extremism researcher at ISD, said: “Even going back on their 2016 posts about climate change, the AFD denied human-made climate change on their social media pages. So while the AFD has not shifted its position, the party has decided to communicate it more frequently.

“The emergence of Greta Thunberg as public figure provided them with a welcome target to communicate their position in a way more appropriate to the dynamics of social media.

“The fact that many mainstream politicians, in particular from the AfD’s key political opponent, the Greens, but also CSU-candidates such as Manfred Weber, supported a 16-year old female activist who was virtually unknown until a few months ago, allowed the party to present belief in climate change as irrational, hysteria, panic, cult-like or even as a replacement religion. Attacking Greta, at times in fairly vicious ways, including mocking her for her autism, became a way to portray the AfD’s political opponents as irrational.”

Fellow travellers of the AfD – conspiracist news outlets like Compact and far-right activists from groups like Pegida – have also latched onto the Greta phenomenon, arguing she is everything from a zealot to fraud to, in the words of leading Pegida activist Tatjana Festerling, ‘mentally retarded.’

But the rising popularity of the AfD contrasts with the even greater increase in support for the Green Party, now polling 2nd behind only the governing CDU.

Lisa Badum, the party’s climate spokesperson in the German parliament, said:  “Climate change is a major concern among German voters ahead of the European elections. A recent poll has shown that 3 out of 4 potential voters in Germany consider climate protection an important factor in their voting decision. “

The AfD was contacted for this article but failed to comment