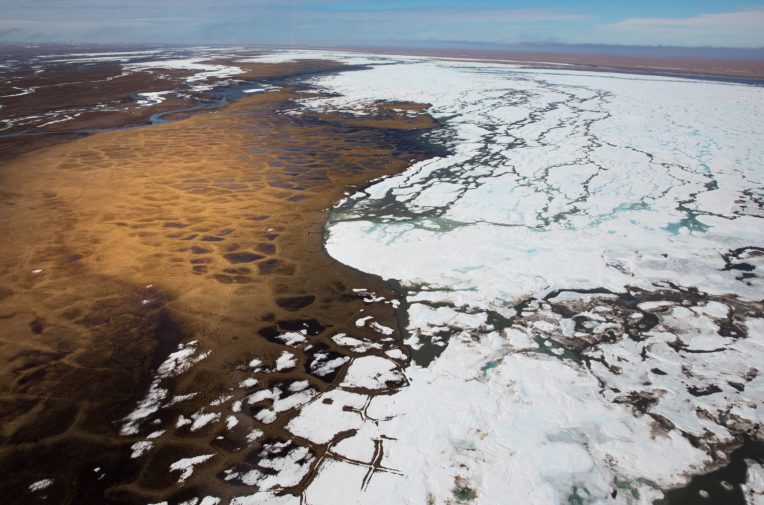 Oil major BP played a key role in lobbying the Trump administration to allow oil and gas drilling in two previously protected areas of the Alaskan Arctic, Unearthed can reveal.

Opening up the areas to exploration poses significant risks to the environment and will undermine efforts to meet the Paris climate targets to prevent catastrophic climate change.

Writing to Trump administration officials, the company first lobbied for more areas to be opened up to drilling off the US coast and then welcomed plans to lease swathes of the Arctic’s Beaufort Sea for oil and gas exploration, according to documents seen by Unearthed.

BP also backed the Trump administration’s move to begin oil and gas leasing within a highly sensitive area of Alaska’s Arctic National Wildlife Refuge, despite the threat this poses to the way of life of the Gwich’in people, who have lived in the region for thousands of years.

Our elders have said that if they go, we go

BP holds senior leadership positions at both organisations; the president of its Alaska business, Janet Weiss, sits on the board of AOGA, while its vice president of external affairs for Alaska, Wendy Lindskoog, sits on the RDC’s executive committee, giving the company oversight of both group’s lobbying efforts.

The high-level lobbying was accompanied by a major social media push backed by another BP-funded industry group. Targeted Facebook posts – which did not mention their oil industry sponsors – urged Trump supporters to write to the federal government in support of opening up the Arctic Refuge, claiming it would have “minimal environmental impact”.

The news comes after a report released by the campaign group Global Witness found that any investment in new oil and gas fields will be incompatible with limiting global warming to 1.5°C.

BP has justified investment in new fields, including in the Arctic, based on its controversial projections that oil and gas demand will remain steady over the coming decades, likely jeopardising efforts to limit climate change.

The findings are part of a wider investigation by Unearthed into BP and other international oil companies’ opposition to global climate and environmental legislation.

In March, Unearthed and the Financial Times revealed that BP had successfully lobbied the Trump administration to roll back key climate regulations that underpinned the US contribution to the Paris climate agreement, despite claiming to support the deal.

The Arctic Refuge is a 19 million acre wilderness in northern Alaska that is among the last unspoiled ecosystems in the world.

At its northern tip, between the Beaufort Sea and the Brooks mountain range, lies the Coastal Plain that is a birthing ground for porcupine caribou and sacred to the Gwich’in people, who have lived in the region for tens of thousands of years.

For decades this area, which the Gwich’in named “Iizhik Gwats’an Gwandaii Goodlit” or The Sacred Place Where Life Begins, has been a target for oil companies and Alaskan politicians keen to tap potential oil wealth.

Bernadette Demientieff, executive director of the Gwich’in Steering Committee, which was established by the Gwich’in Nation in the 1980’s to fight attempts to open the area to drilling, told Unearthed: “The Gwich’in people have a cultural and spiritual connection to the porcupine caribou herd. There was a time that we were able to communicate with them and we made a pact to take care of each other and so for thousands of years… we migrated with them.”

“During calving season they go to the coastal plains and we never set foot there, that place is sacred to us, that was our way of honouring them and leaving them be. This is their calving, as a mother I know how sensitive that time is to give birth and so there’s no Gwich’in that ever went to the calving grounds, we’re forbidden,” she continued.

The Gwich’in Nation has successfully fought off efforts to open up the Coastal Plain for more than 30 years, but in December 2017 oil companies and Alaskan politicians finally got their way when Trump signed his flagship tax reform package into law.

This contained provisions, inserted by Alaska senator Lisa Murkowski as a condition of her support, requiring the US interior department to hold two oil and gas lease sales in the Coastal Plain before December 2024.

Demientieff said the decision meant an existential struggle for her community: “This is about survival for us… I see a lot of people who are really stressed, overwhelmed, some are scared, some are angry, it’s causing a lot of trauma.”

The oil fight has also brought the Gwich’in into conflict with the Iñupiat people, many of whom support development and own the mineral rights thorough the Arctic Slope Regional Corporation (ASRC). ASRC did not provide comment when contacted by Unearthed.

A spokesperson for BP said: “We review access and exploration possibilities worldwide, and consider participating only if they are consistent with our business strategy, competitive with opportunities we have elsewhere and we are confident that we can operate safely and responsibly, meeting regulatory requirements and our own high standards.”

Together with US oil major Chevron, BP holds rights to drill in the coastal plain dating back to the 1980s. So when the US interior department kicked-off the leasing process for the area in April 2018, BP Alaska president, Janet Weiss, wrote to officials welcoming the move.

A day after that letter was sent, BP’s Susan Dio told a meeting of the Resource Development Council of Alaska (RDC) that the decision to permit drilling was a “big policy victory”.

In previously unreported comments, Dio said: “Alaska won a big policy victory at the national level this past December when the federal government opened the door to oil and gas development in the Arctic National Wildlife Refuge.”

“We support increased access to federal lands for responsible exploration and development of oil and gas resources and we also support the department of interior’s environmental impact assessment study to analyse the potential environmental, social and ecological effects of a leasing program in the 1002 area [of the Coastal Plain],” she continued.

The assessment is a necessary first step to drilling in the region.

The campaign to open up the Arctic Refuge was supported by BP through both its national-level and Alaskan lobby groups, including the RDC and AOGA.

BP is encouraged by the exploration potential in the Beaufort

The RDC, in particular, enjoys close relationships with Alaska’s political representatives in Washington DC, who inserted the key clause in Trump’s tax reform package. Alaska senators Lisa Murkowski and Dan Sullivan are both ex-officio members of RDC, as is Congressman Don Young.

When Murkowski first sought to include provisions to open up the Coastal Plain in Trump’s tax reform bill, the RDC issued an “action alert” urging member companies to send letters of support to the Senate energy and natural resources committee, which was holding a hearing about the proposal.

The paid posts, which garnered hundreds of thousands of impressions, sought to mobilise Americans to “support Trump” by writing to officials in support of leasing the Coastal Plain area for oil and gas drilling.

API did not respond to a request for comment but Kara Moriarty, chief executive of AOGA, told Unearthed: “Our mission is to advocate for the long-term viability of the oil and gas industry in Alaska, so we have encouraged every Administration to allow for access to onshore and offshore areas for oil and gas exploration.”

“We proudly represent not only our members but also the 65% of Alaskans who support opening a tiny fraction of ANWR for oil and gas exploration,” she continued.

As well as providing funding, BP holds a seat on the API’s powerful upstream committee, which sought to influence the Trump administration’s offshore Arctic policy within weeks of him assuming office.

In February 2017, Holly Hopkins, a senior API upstream policy advisor, wrote to the interior department with a list of “top priority” policy asks for the new administration, which included a request that Trump roll back an Obama executive order withdrawing the Chukchi and Beaufort Seas from the offshore leasing process.

Just months later, Trump announced that he would reverse the Obama policy and open up Arctic waters, triggering widespread condemnation and legal action from environmental groups.

In the weeks leading up to the decision, official lobbying disclosures show that BP was actively lobbying in Washington DC on “issues related to arctic oil and gas development” [sic]. The company declined to clarify precisely what these issues were when asked to by Unearthed.

Following Trump’s announcement, Unearthed has learned that BP wrote to administration officials requesting that additional areas of the US coastline be included in an upcoming offshore oil and gas lease sale.

“Achieving the administration’s “America First Energy Plan” will require increased production, additional investment and advances in technology,” BP wrote, adding that this would require “expanding access for exploration and production.”

It also pointed to a joint industry submission signed by three of its trade groups; AOGA, API and the National Offshore Industries Association, which urged the interior department to include new areas of the Alaskan Arctic in the next leasing round.

A few months later the Trump administration controversially announced that it would make the entire US outer continental shelf available for oil and gas leasing and would include areas of the Arctic in the next lease sale.

Starlee Sykes, president of BP’s Gulf of Mexico and Canada business and its representative on the API’s upstream committee, then wrote to administration officials praising the decision: “in particular, BP is encouraged by the exploration potential in the Atlantic OCS Planning Areas, and the Beaufort Planning Area in Alaska,” she said.

Earlier this year a federal court ruled that Trump’s decision to overturn the ban was unlawful, dealing a major setback to the leasing process. The case is expected to eventually reach the US Supreme Court.

The Resource Development Council for Alaska and the American Petroleum Institute failed to respond to requests for comment by Unearthed. The Arctic Slope Regional Corporation did respond but declined to comment.