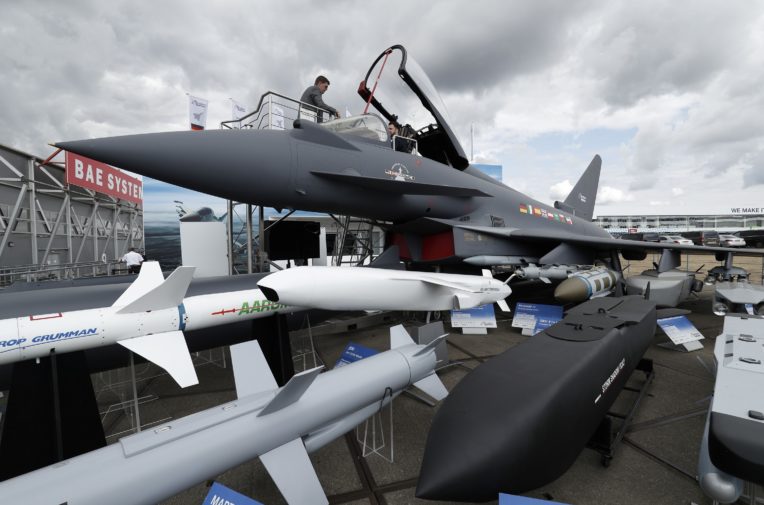 How weapons manufacturers are preparing for climate change

How weapons manufacturers are preparing for climate change

Unearthed and VICE have gone through documents prepared by some of the world’s biggest weapons manufacturers to see how they are responding to the climate emergency. We’ve learned that the arms industry fears cuts in fossil fuel use will undermine demand for highly polluting products like tanks, planes and ships. But from developing new, greener weapons to spotting “financial opportunities” amid threats to public safety caused by environmental disaster, the industry is looking for ways the climate crisis can increase sales.

Raytheon, an American aerospace and defence company which had net sales worth in excess of $27 billion in 2018, told the Carbon Disclosure Project (CDP) last year that it’s investing in technologies that are either “low carbon or do not require as much fossil fuel”. So you can give Mother Earth a big hug at the same time as you eviscerate your enemies from the battlefield.

In a report submitted to the CDP – a small NGO which asks major companies to detail their climate plans annually – that it was putting its money into “high powered microwave systems”, which apparently can be used to disable multiple drones at once, and “high energy laser weapon systems”. A video posted on Raytheon’s YouTube channel shows the lasers easily swatting drones and missiles out of the sky like a game of low-carbon Space Invaders.

BAE Systems, the British firm which has played a leading role in supplying the Saudi air force with materials for its war in Yemen, wrote in its 2019 CDP submission that it was testing new equipment in a “wider range of temperatures than similar products have been specified for in the past”, many of its key markets, including the Middle East, face increasing extremes of heat if temperatures rise unabated.

Reduce, re-use, recycle are the watch words of the eco-conscious everywhere, and in the UK, the Ministry of Defence has said it is looking to cut down on plastic and other forms of waste by reusing “munition packages”, used to hold everything from bullets to missile components.

According to Ocean Aero’s website, these solar submarines can tackle illegal fishing and help with environmental monitoring. But in an article jointly published by Ocean Aero and Lockheed Martin in 2018, sets out, they can also be used for silently killing people.

“In the future, it is clear that the Submaran™ will be ‘missionized,’” it says euphemistically. The document adds that such missions likely use “a variety of Lockheed Martin payloads and systems integration expertise, to become the cross-domain lynchpin of a ‘system of systems’ performing a diverse assortment of potential missions, including those requiring a covert platform.”

That’s one of the reasons why firms say they are moving to reduce emissions and transitioning to renewable energy to power their factories and offices. Lockheed Martin, for example, talks up its new “biomass boiler system” at its facility in New York in its 2010 response to PWC. This year, Northrop Grumman said it met its own target of reducing its absolute greenhouse gas emissions by 30% from 2010 levels this year.

But despite the eye-catching initiatives, the changes appear mostly cosmetic. The customers for these companies are national governments, the same governments stalling progress to tackle climate change and publicly doubting the science under-pinning it. These firms can’t really act in a significant way if their customers don’t want them to.

Climate change is likely to mean more instability in the world. More conflict as resources decline and more migration as parts of the world become difficult to live in.

A 2015 memorandum to Congress from the US Department of Defence read: “Climate change is an urgent and growing threat to our national security, contributing to increased natural disasters, refugee flows, and conflicts over basic resources such as food and water.”

Several defence companies are looking at this trend and seeing an opportunity. Lockheed Martin told us it works with governments and companies to improve climate monitoring. French firm Thales told the CDP that it could see increased demand for the company’s weather forecasting technologies. There could also be more demand for new equipment to help on humanitarian missions, trucks and ships to help in evacuations, for example.

With political leadership it is possible that these companies could contribute more than just coming up with less energy intensive ways to blow things up, or new weapons with which to fight each other as the crisis worsens.

The coronavirus pandemic has shown for the first time since the Second World War that major companies can be forced to work for the public good. In the UK, a consortium of nearly 30 companies, including Airbus, Rolls-Royce and McLaren, are currently working to supply the NHS with urgently needed ventilators.

However, Steve Chisnall, a lecturer in International Security and Strategy at Southampton University, said that environmental opportunities are likely to be “small beer”.

He said: “They’re always going to want to sell big weapons systems because that’s where the money is.”

Chisnall, who spent a career in the RAF before entering academia, believes that weapons manufacturers, with their scientific knowledge and manufacturing expertise, could play an important role in transforming the global economy.

But for now, they’ll probably just keep reacting to the world as it is. “These companies know a huge amount about climate change. They have huge research teams and tremendous resources. The problem is that, like the rest of us, they don’t know what the future of security is going to be,” says Chisnall.

As if to prove his point, shortly after talking up its work on weather forecasting, in its submission to the CDP, French arms giant Thales mentions the possible “financial opportunities” in the area of “public safety” as the climate changes.

This article was co-published by VICE.