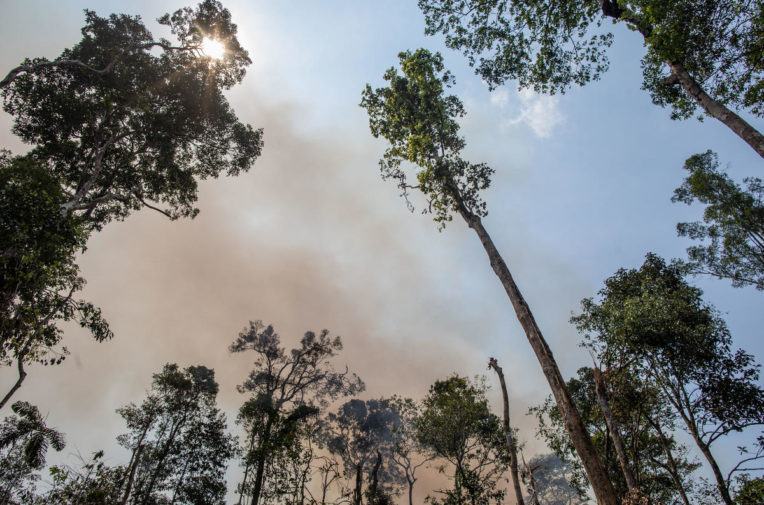 British-based banks and finance houses have provided more than $2bn in financial backing in recent years to Brazilian beef companies linked to Amazon deforestation, according to an analysis by the Bureau of Investigative Journalism (TBIJ) and Unearthed.

Deforestation of the Amazon has shot up during the Covid-19 crisis, as Brazil’s environmental agencies struggle to operate and president Jair Bolsonaro moves to weaken safeguards on Indigenous lands.

The financial backing – which came in the form of bond purchases and underwriting –  went to Minerva and Marfrig. UK-based financial institutions also held tens of millions of dollars worth of shares in JBS, the world’s biggest meat company, which has also been linked to corruption. All three have been linked to  substantial deforestation in their supply chains, although the companies say they are working to monitor their supply chains and mitigate risks.

Banks frequently hold bonds and shares on behalf of clients who invest through their asset management funds.

If the government’s claims to global leadership on climate are to have any meaning at all, it must stop turning a blind eye to the links between UK banks and deforestation

Other European-based institutions provided an additional $2.1bn of backing. Santander collectively underwrote $1.4bn worth of bonds across the three companies. Deutsche Bank underwrote $69m worth of Marfrig bonds and provided JBS with a $57m corporate loan.

Some of the financial institutions told us that they are engaging with the three companies on the issue of deforestation in their supply chains and may reconsider their support in future if they see insufficient progress.

British MPs said more needed to be done to tackle the issue. Kerry McCarthy, Labour MP for Bristol East, told Unearthed: “We need far more accountability and transparency in our supply chains and in the investment activities of British companies overseas… The Environment Bill currently going through Parliament offers an ideal opportunity to put such measures in place.”

Caroline Lucas, Green MP for Brighton Pavillion, told the Bureau: “No UK financial institution should be profiting from the destruction of rainforest or other precious habitats in Brazil or elsewhere. If the government’s claims to global leadership on climate are to have any meaning at all, it must stop turning a blind eye to the links between UK banks and deforestation, by introducing strong regulation, harsh penalties and strict provisions on full public transparency of environmental and social impacts of all investment portfolios.”

The findings come as the European Commission considers new financial reporting rules in light of the coronavirus crisis that would require banks, insurance firms and listed companies to disclose their exposure to biodiversity loss and pandemic risk.

Multiple scientists are now warning that deforestation is a key factor increasing the risk of new diseases emerging. There are also increasing concerns that activity linked to deforestation is helping to spread the novel coronavirus to Indigenous groups.

Globally, the three meat companies were backed by $12.6bn in corporate loans, bonds and underwriting, alongside $5.5bn in shareholdings, from global banks and financial institutions between 2013 and 2019, according to the data, which was first produced by the international NGO Global Witness and non-profit Dutch analysts Profundo. It was collated from financial databases held by Bloomberg, Thomson Reuters, Eikon, Orbis and others.

Shona Hawkes from Global Witness, said: “The UK finance sector’s exposure to deforestation is systemic. If the UK government is serious about being a climate leader, it must put in place laws that provide absolute clarity that UK firms, including finance, will not be complicit in fuelling the destruction of climate-critical forests or threatening forest communities’ rights.”

Amid the global outcry over last summer’s Amazon fires, investigations by the Bureau, the Guardian and Repórter Brasil revealed both JBS and Marfrig had purchased cattle from suppliers who had broken rules around Amazon deforestation.

Research by Trase – a supply-chain initiative run by the Stockholm Environment Institute and NGO Global Canopy – found that the supply chains for exported beef from JBS, Minerva and Marfrig combined were linked to up to 500 square kilometres of deforestation in Brazil every year.

The three companies say they are confident that the farms their slaughterhouses directly purchase cattle from are not involved in deforestation, but they also accept they cannot know the origin of some animals that have passed through other farms beforehand. The companies suggested that the correlation identified by the analysis does not prove their cattle come from farms involved in deforestation. There are thousands of ranches in Brazil, many of which specialise in a different stage of the cattle rearing process, from breeding to raising to fattening.

JBS, Minerva and Marfrig all have admitted they cannot monitor the earlier ranches in their supply chains – otherwise known as “indirect suppliers”. Marfrig told the Bureau last November that gaps in its audit trail meant more than half of the cattle it bought could have been bred or raised elsewhere.

Last year the Bureau established that Marfrig, along with Minerva Foods and JBS and their subsidiaries, shipped at least 147,000 tonnes of beef to the UK in the past five years – enough to make 170m burgers a year.

That much meat is worth £1bn. Much of it was canned corned beef destined for supermarkets and other retailers, as well as frozen meat imported for wholesalers and manufacturers.

From there it could end up in hospital dinners, ready meals and fast food, through a chain of little-known catering and food production companies. The Bureau identified several of these chains, including one that ended with the Ministry of Defence.

The Bureau and the Guardian also established that more than a quarter of a million fire alerts were issued in the estimated cattle buying zones of JBS slaughterhouses. Its factories are known to export to Europe, including to the UK.

And there were more than 66,000 fire alerts in the probable buying areas of Minerva, the second largest Brazilian beef exporter, and almost 80,000 around abattoirs owned by Marfrig.

In addition to exporting beef to Europe and the UK, JBS also holds a controlling stake in US poultry firm Pilgrims Pride which – in turn – owns one of the UK’s largest chicken producers Moy Park which produces approximately 312 million birds a year.

JBS told the Bureau: “JBS takes a zero-tolerance approach to deforestation in its supply chain. We have worked for more than a decade on the frontlines to drive meaningful, responsible change in the region and have made considerable investment in education, monitoring and enforcement to drive forward industry standards…any suggestion that JBS’ supply chain has links to deforestation is irresponsible and misleading”

The company said it has blocked thousands of direct suppliers for breaking rules concerning deforestation and is working with the Brazilian government and industry on solutions for monitoring indirect suppliers.

In a statement, Marfrig said: “Marfrig recognizes the urgency and challenges related to global warming and is in line with the resolutions of the Paris Agreement on reducing greenhouse gas emissions. In Brazil, most of the emissions are related to land use, and livestock farming plays an important role in this issue…

“Since 2009, Marfrig has maintained a public commitment to “Zero Deforestation” in the Amazon biome. As part of this undertaking, it established strategic and operational guidelines that are transformed into concrete action to strengthen control of its cattle sourcing and to mitigate any risks of sourcing cattle from critical zones associated with deforestation and improper and illegal work conditions.”

It added it was developing a tool to combat the risk of buying from indirect suppliers that it can’t monitor.

Minerva told us their direct purchases come from zero-deforestation areas in the Amazon and they privately monitor thousands of suppliers. The company said “there are no accessible and reliable data and statistics on the complete cattle traceability chain” in Brazil and it is evaluating using a new tool that’s been developed by the National Wildlife Federation and University of Wisconsin to monitor their indirect suppliers.

In response to the findings, an Aberdeen Standard Investments spokesperson said: “There are definitely shortcomings in supply chain monitoring for the entire beef industry in Brazil, but these practices are improving across the industry and investor activism plays an important role in this development… At present, we remain invested but this may change depending on a number of factors.”

HSBC told us they do not comment on client relationships, but that they take their agricultural commodities and products policies seriously and regularly assess their clients for their commitment to sustainable business practices.

Schroders said: “We are in continuous dialogue with both Minerva and Marfrig… We have pushed for and seen encouraging signs of progress on increasing visibility to indirect suppliers… If we did not see these signs of progress, we would certainly consider changing our recommendations for these companies.”

Prudential UK told us that since 2019 they have begun to actively engage with companies operating in the Amazon region to find solutions and are taking appropriate actions to manage these investments in line with their policies.

Santander said: “In Brazil, we conduct annual reviews of more than 2,000 clients, including those that are large soy producers, soy traders and meatpackers, especially about their supply chain.”

Deutsche Bank added: “[We] will not finance activities where there is clear and known evidence on clearing of primary forests, areas of high conservation value or peat lands, illegal logging or uncontrolled and/or illegal use of fire… We acknowledge that large-scale agricultural production in some cases can be linked to deforestation,  poor labor conditions or conflicts with local communities.”

Crédit Agricole said: “Crédit Agricole group is a responsible player … We do not finance projects on deforested land with high biodiversity value”. The bank’s spokesperson said they had contacted JBS to obtain more information after the Bureau’s request for comment.

A version of this article was also published by the Guardian and the Bureau of Investigative Journalism.