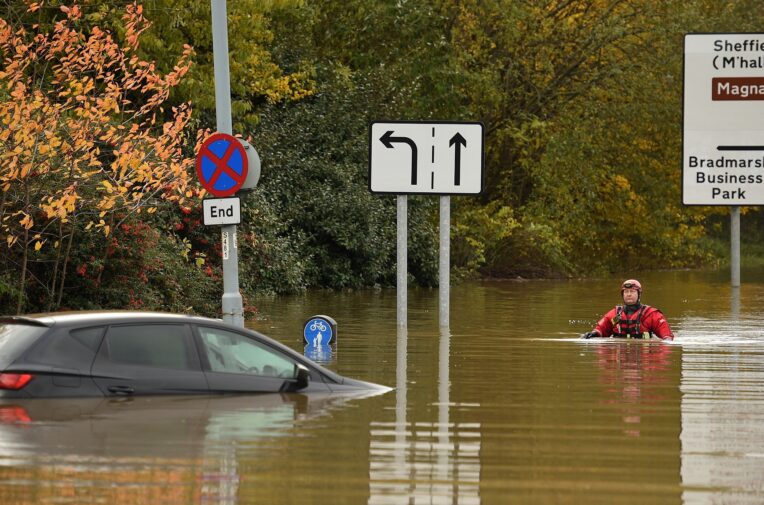 Over 1,000 private flood defences in vulnerable parts of England were in poor condition last year

Over 1,000 private flood defences in vulnerable parts of England were in poor condition last year

More than 1,000 privately owned flood defences protecting some of England’s most at risk towns and cities were found to be in a ‘poor’ or ‘very poor’ condition by Environment Agency inspectors last year.

According to the latest available data 28% of all flood defences defined by the government as ‘high consequence’ are in private hands and that there is no public record of who owns this vital infrastructure. These defences range from flood walls and embankments to outfall pipes and culverts – underground pipes that run below roads, railways or other property.

The new investigation, published with The Guardian, reveals that there is little oversight over these privately owned defences, with local authorities often not knowing who owns or maintains these assets in their own towns and cities. We have also learned that while the Environment Agency has powers to do emergency work on private defences if life is at risk, it finds it hard to make landowners play ball.

All we can really do is ask nicely. We don’t have out and out powers to make somebody actually fix something

The revelations come weeks after the agency warned hundreds of people could die in floods in the UK if stronger measures are not taken to prepare for the impacts of climate change.

Data obtained under Freedom of Information rules showing inspections in 2019/20 shows that ‘high consequence’ private assets were twice as likely to be in poor condition than those maintained by the EA, with 8% or 1,109 private defences rated as subpar. ‘High consequence’, according to the agency, means defences “that contribute to managing flood risk in a location where the consequence on people and property of an asset failing is high”. Defences are inspected and then rated from conditions 1 to 5, with 1 meaning ‘very good’ and 5 ‘very poor’.

By mapping private defences, using data provided to us by the agency, and overlaying this with materials shared with us by Guy Shrubsole as part of his Who Owns England? project, and documents from Land Registry, Unearthed has worked to build a picture of who owns poorly rated defences across the country.

Responding to our investigation, Olivia Blake MP, Labour’s Shadow Minister for Nature, Water and Flooding said the government must do more to ensure private defences are up to scratch.

“As our winters get wetter, the climate emergency will put flood defences under greater strain. The government must act to ensure there are clear responsibilities and adequate measures in place so that any flood defences which are privately owned and critically important to the protection of the public are properly inspected and maintained,” she said.

A sinkhole in Sheffield

The poor condition of some privately held defences threatens to undermine government efforts to increase protections against climate change across the country.

In January 2017, a sinkhole swallowed up two spaces in the car park outside the Decathlon store in Sheffield city centre. The sinkhole was caused by the collapse of a culvert — or underground pipe — owned and managed by the retailer, which contains the Porter Brook, a small river concreted over in Sheffield’s industrial heyday.

Four years after the collapse, our data shows the defence was still classed as being in “very poor” condition by the EA, one of 36 subpar privately owned defences in the Steel City.

James Mead, the flood and water manager at Sheffield city council, told the Guardian and Unearthed that Decathlon had been warned before the sinkhole that it needed to repair the culvert, but hadn’t. He added that despite being shored up with a steel girder as a temporary fix the defence is “still not really up to scratch.”

Mead’s powers are limited to force Decathlon to do the work needed to improve the culvert. “All we can really do is ask nicely,” he admitted. “We don’t have out and out powers to make somebody actually fix something.”

Decathlon UK said it repaired the culvert “at considerable cost” after the 2017 sinkhole, before uncovering the river to encourage flora and fauna. Heavy storms in February 2020 caused the collapse of part of the culvert wall, which the company again paid to be repaired.

“The culvert is now safe and we are continuing to monitor this situation,” said Decathlon’s regional property manager, Luke Fillingham, adding: “We’re pleased to say that the river channel has never been blocked and is now in better condition than when we originally purchased the land in December 2010 thanks to the work we have undertaken.” Further repairs are planned for 2022.

At the city’s main train station, the River Sheaf passes beneath the terminal in a culvert that was rated as being ‘very poor’ in 2019/20. Network Rail owns the land.

The story was also published by

Across England, Unearthed found 37 defences rated as ‘poor’ or ‘very poor’ on land owned by Network Rail. In response to a fact-checking email, a spokesperson told us: “If any of the culverts in your data pass beneath the railway, I understand that there is a reasonable likelihood that they are Network Rail owned and managed.” Network Rail later told us that it wasn’t able to check if it managed all 37 defences in our list in time for our deadline.

Rochford in Essex had 21 privately owned condition 4 or 5 defences in 2019/20, including seven that we have established are owned and maintained by QinetiQ, a defence technology company.

The Ministry of Defence has owned a stretch of land along the east Essex coast, from Shoeburyness to Foulness Island, for more than 150 years. In that time the site has been used primarily as a weapons testing range and, for a spell at the height of the Cold War, as a location to examine the effects of nuclear explosions. Today the small number of residents who call Foulness home are protected from the sea, in part, by seven ‘very poor’ condition flood defences owned by QinetiQ, which manages the site on behalf of the MoD.

QinetiQ, which made a post-tax profit last year of $171.4m, said in response to this story that, regarding the defences on Foulness, following a survey, “works identified as highest priority were completed in 2017 and further improvements are on track for completion in 2024.”

Elsewhere, confusion reigns. Across England, there were 29 ‘poor’ or ‘very poor’ flood defences on land owned by the Queen’s Crown Estate. However, a spokesperson informed us that the Crown Estate does not own or maintain these defences. When we asked them if they knew who did, they did not respond directly, but said: “where flood defences have been installed by third parties on Crown Estate land we will always work with the relevant authorities to offer any assistance we can to ensure they are able to access and maintain as required.”

There is no public record of who owns private flood defences in England and local councils don’t appear to be across this information either.

Kirklees council in West Yorkshire, which includes the town of Huddersfield, told us it didn’t know who owns the 23 defences, rated as either condition 4 or 5, in their area. Carlisle council said the same when we approached them about the 30 ‘poor’ private defences in the city.

The National Audit Office published a report last year that found that the EA’s efforts to improve England’s flood defences were being undermined by a lack of coordination between all the different bodies tasked with maintaining the country’s assets. The EA oversees flood defences in England, with other agencies enjoying oversight over assets in the rest of the UK. Local authorities, internal drainage boards, and the EA itself all have the job of managing defences, alongside private owners. The NAO recommended the EA improve its level of communication and coordination with these bodies.

With increased flooding one of the greatest risks facing the UK as a result of climate change, the government has announced spending of £5.2bn to build 2,000 new flood and coastal risk management schemes across England. Private defence owners won’t be eligible to receive any of this money.

Responding to this story, an EA spokesperson said: “We routinely inspect both Environment Agency and third party flood assets. Repairs are prioritised where there is threat to lives and livelihoods. We work closely with third party asset owners to encourage them to undertake repairs.

“Since 2015, more than 300,000 homes have been better protected from flooding on time and on budget. We’ve also made extensive preparations for the winter months, with thousands of frontline staff ready to respond to a flooding incident should it occur.”

More on flooding in England