Q&A: What’s going on with the UK government halting subsidies for onshore wind? 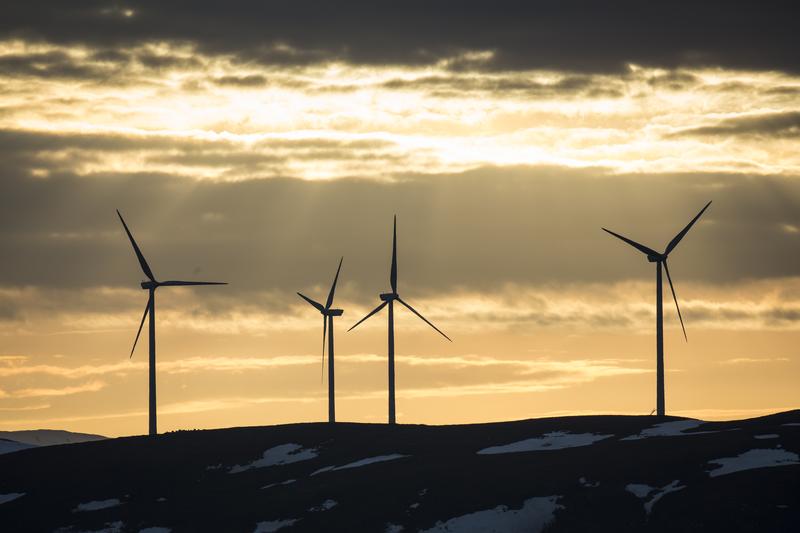 So the government has made good on its manifesto promise to halt onshore wind, sort of.

They have stopped the Renewables Obligation (RO) subsidy for onshore wind a year early, and it will end on 1 April 2016 instead of 2017, putting around 3,000 turbines at risk of being shelved.

The business community – from electricity utilities to renewables firms, and even the traditionally conservative CBI – have protested that the changes and policy uncertainty will undermine the UK’s credibility with investors in energy infrastructure.

In their own press release ministers suggested that 5.2GW of onshore wind projects in the planning pipeline could be spared (around 3,000 turbines have already received planning consent).

But an email from The Department of Energy and Climate Change (DECC) to Telegraph reporter Emily Gosden explained they think that 2.9GW of capacity could benefit from this grace period. It feels like they need an internal meeting.

For the energy geeks out there…more detail on onshore wind grace period from DECC pic.twitter.com/fAcu2YQAoR

DECC says in its statement this will allow us to meet climate targets despite cutting the subsidy.

How will the grace period be decided?

Beyond the top-level numbers its not really clear yet how it will be decided which projects qualify for the grace period, or not.

“This will allow projects that are already well advanced to be supported under the RO… they will be able to be eligible to still go forward under the RO,” they added.

But the RO isn’t actually the only large-scale subsidy for onshore wind, there is also the government’s new “technology neutral” subsidy scheme – Contracts for Difference (CfDs).

CFDs are an auction based policy that’s lined up to replace ROs (though there was meant to be more of an overlap).

Everyone (okay some people on Twitter, see below) assume that CFDs won’t be affected by plans to stamp out new onshore wind.

This is mainly because it’s a market-based mechanism allowing subsidy for all forms of low-carbon power. It could be illegal under EU law to mess with a system that’s meant to be technology neutral.

A DECC spokesperson told Unearthed that Rudd will announce her plans for onshore wind and CFDs when the further CFD allocation round is announced – it was scheduled for October by the previous government but could be anytime.

When pushed on whether this meant the onshore wind would be cut from CFDs or not, the spokesmen said: “There is a clear manifesto commitment.. regarding subsidies for onshore wind. The secretary of state will set out how and when when she announces the plans for future allocations.”

They added, over email: “With regard to CfDs, we have the tools available to implement our commitments on onshore wind and SoS will set out how she will do so when announcing plans for further CfD allocations.”

Clear as mud. But what they said on the phone seems to slightly suggest that there may be some changes to onshore wind in the CFD allocations. It would be very strange indeed if that were true and we have no idea how it will be implemented.

Perhaps onshore wind will be banned from the auction, or perhaps the government will just set a level below which they don’t believe a price “counts” as a subsidy, or the government could have an empty pot of money set aside for onshore wind – as they have for biomass.

What’s going on with devolved regions?

The manifesto commitment appeared to be for the UK, but that isn’t necessarily how it will work in practice.

“We are seeking views from the devolved administrations about how this will work”, said the DECC spokesperson. So not much change since we last looked at this issue.

But maybe they haven’t been trying very hard, so far. Scottish minister for energy Fergus Ewing was still wondering what would happen as recently as yesterday.

This is significant because 70% of planned wind farms would be located in Scotland.

Will bills go up?

All of which leads to the question of what impact this policy – whatever exactly the policy is – will have on bills.

DECC states that the policy change is part of a plan to “keep bills as low as possible for hard-working families”.

In the short term it’s just neutral. The amount of money allocated for clean energy (the Levy Control Framework) is fixed until 2020. More onshore wind and less offshore could leave more money in the pot – but consumers may not see it.

But longer term a new report out by left-leaning think tank IPPR claims that an onshore wind moratorium would result in higher bills – and we’re committed to the Climate Change Act, which has a 2030 emissions reduction target.

“Since onshore wind technology is the cheapest low-carbon power source available in the UK, ruling out any growth in this sector will have the effect of increasing the cost of achieving legally binding targets on climate change and clean energy,” IPPR writes.

The report states onshore wind is much cheaper than offshore wind, so replacing it with offshore wind would cost consumers approximately an extra half a billion pounds through to 2030 – or £3 billion if you use the National Grid’s scenario where we meet our climate targets. Of course these numbers may vary depending on how many turbines find their way into the RO “grace period”. 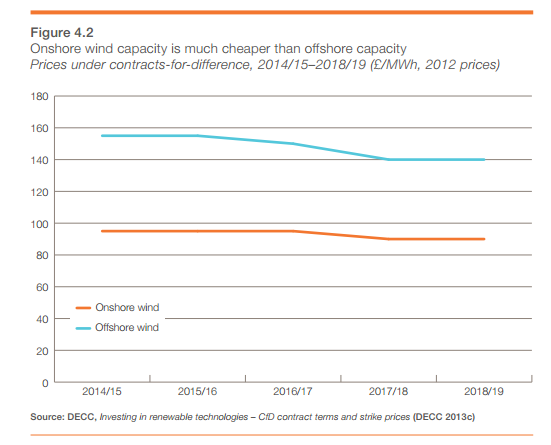 This echoes what engineering experts have been saying and figures from Scottish Power suggest British bill payers could pay £2-£3 billion more if onshore wind subsidies are scrapped.

Still, offshore wind is possibly the most expensive renewable technology you could compare offshore wind to. Solar is pretty much as cheap, and it’s possible some solar farms could replace some onshore wind. Amber Rudd, DECC’s energy and climate secretary has said that she wants a solar revolution in the UK.

A DECC spokesperson said, “Our levy control framework puts a cap on the cost of renewables to consumers, so this won’t push up bills.

“We have enough onshore wind now – including projects that have planning permission, we have as much as we’d projected. If we’d allowed the RO to stay open longer, we could have ended up with more projects than we can afford – which would have led to either higher bills, or other renewable technologies losing out on support.”

Which is ok – but the IPPR is looking into the period beyond the next five years – DECC isn’t.

Other stuff worth noting:

DECC will examine its options to continue support for community energy projects, as part of the Feed-in Tariff Review later this year, it writes.

The department also says it will consult local people in decisions about wind turbines being built in their area – meaning that local authorities will have planning permission powers to veto onshore wind projects rather than the state.

Councils will only be able to approve projects with community backing and that have are part of local or neighbourhood plans, the Guardian reports.