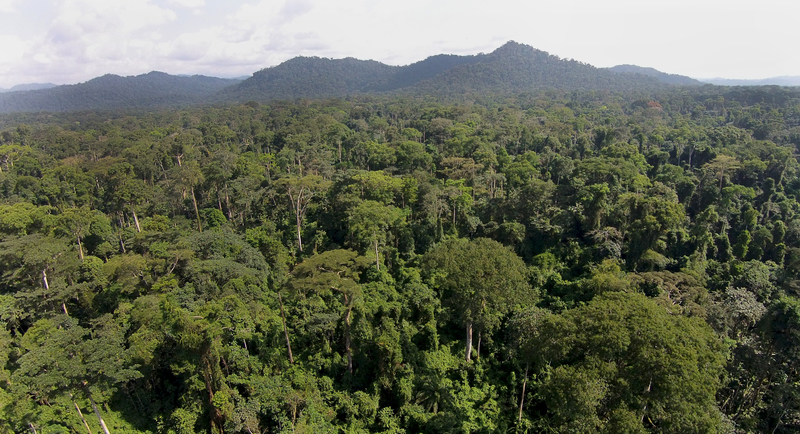 The world’s second largest rainforest could be the next frontier in the international logging and palm oil trade, according to leading geographers and ecologists.

The Congo Basin rainforest stretches over 1.4 million square miles and six countries, from Cameroon in the west to the Democratic Republic of Congo in central Africa.

For years, a combination of political volatility and conservation efforts conspired to keep the region relatively pristine, with animals like gorillas, forest elephants, okapis and bonobos thriving.

But over the last decade, deforestation has ramped up, threatening wildlife and the world’s climate.

Now with international companies eyeing up the area as the next industrial agriculture and palm oil hotspot, can the forest survive?

Look at any map of Africa and you’ll notice that a vast expanse of green covers the continent’s middle. This is the Congo Basin rainforest.

In total, the region is home to roughly 30% of the planet’s tropical forest and, as Yadvinder Mahli, a professor of ecosystem science at Oxford University explains, it plays a big role in shaping our climate.

“It’s difficult to model, but as with the Amazon, deforestation in the Congo Basin is likely to have a global impact.”

According to Mahli, this means that changes to the Congo Basin, brought by things like deforestation, not only mean the loss of biodiversity, but could also lead to changes in things like global patterns of rainfall.

Knowledge about the ecological importance of the region hasn’t stopped logging and palm oil companies moving in.

Relative political calm in countries like the Democratic of Congo in recent years, which accounts for 60% of the rainforest, has led to investors seeing the country as more appealing.

In March this year, reports suggested that the government of the DRC was considering ending a 14 year moratorium on logging in its portion of the rainforest.

The moratorium was introduced in 2002 as a way of preventing a mad dash for resources after the country’s civil war ended. Despite the restrictions, illegal logging and animal poaching has become a huge problem in the country.

DRC’s environment minister, Robert Bopolo Bogeza believes that the allocation of new logging licenses will give his country much needed funds to aid economic development.

But this view is criticised by anti-corruption and environmental groups, who say that the benefits from industry have not yet been felt my ordinary people in the country.

Back in March, Global Witness quoted Joseph Bobia of DRC-based NGO Réseau Ressources Naturelles as saying, “The argument that logging can significantly contribute to government revenues is completely unfounded. Around a tenth of the DRC’s rainforest is already being logged. And yet, in 2014 the country obtained a pitiful $8 million in fiscal revenues from the sector – the equivalent of about 12 cents for every Congolese person.”

European giant Socfin currently has 80,000 hectares of palm oil trees across Africa and reportedly holds a further 325,000 hectares worth of concessions.

In Cameroon, the company SG Sustainable Oils Cameroon (SGSOC) holds significant interests in the palm oil sector. The company holds a 20,000 hectare concession on the edge of the rainforest and is hopeful of securing further licenses from the Cameroonian government.

At the same time, local groups have brought a legal case against the firm, with hundreds of farmers accusing the company of encroaching on their farm land, accusations that SGSOC deny.

Currently the booming palm oil industry is focused in Indonesia and South America. The sector has been blamed for ravaging the Indonesian rainforest and sparking devastating forest fires in the region.

David Hoyle, a director at the group Pro Forest, believes that the palm oil industry is at a “critical juncture” in Africa right now

“You have a lot of the big companies who make big commitments and you’ve got the buyers – large consumer companies like Nestle – who say they’ll buy palm if it’s produced responsibly and you’ve got governments who are looking at how they can make their sectors more sustainable,” he says. “We’re at a really delicate point.”

Mahli echoes these remarks. “Given the governance challenges in the Congo Basin I’d be very surprised if palm oil went through in a carefully managed way, so I think it poses a huge threat,” he argues.

“We can only hope that a country like DRC skips past the phase that Indonesia has found itself in with palm and goes to where Brazil is, in terms of its environmental protections.”

Global Forest Watch has been monitoring deforestation across the globe for years.

On its website, you can explore an interactive map showing how tree coverage has changed across the world over the last 15 years.

It shows how until recently, tree loss in the region was relatively low, around 1% a year, with deforestation limited to large trees. But that’s changed over the last five years as industrial agriculture has begun to move in.

This has had noticeable impact on wildlife in the region, particularly forest elephants which have declined dramatically since the turn of the century.

One study published last year, found that the number of forest elephants in the Congo Basin had dropped by 60% since 2002.

Kate Abernethy is an associate Professor at Stirling University focusing on zoology and ecology. I speak to her on the phone from Gabon where she is doing field research.

She explains that the drop-off in the forest elephant population is due mainly to increased ivory poaching in the region, though deforestation has had impact.

“The less forest there is, the less places they have to hide. The more fragmented a forest, the easier it is for poachers to find them.”

She argues that we may only be at the beginning of seeing what impact deforestation has on wildlife in central Africa.

The deforestation here has been incredibly low, around 1% a year, but we’re
possibly about to see a very different sort of deforestation.

“At the moment, forest elephants still have the ability to move around and find another tree if a selective part of the canopy is missing.

“But if people start to clear land, that will have a much bigger impact on large wildlife. We’re right on the brink of that.”

A region on the brink

The overwhelming sense you get from talking to experts, is that the Congo Basin is a region on the edge, facing a double attack from deforestation and climate change.

Yadvinder Mahli again: “If you look at the historical records, if you look at all the tropical rainforest regions in the world it is the most sensitive to climate change.

“Even three or four thousand years much of the Congo Basin forest  retreated into the Savannah, much more than Amazon and the forests in Asia. Africa is much drier and cooler than other tropical regions, so it is much more vulnerable to climate change.”

Yet for all the concern about the area, monitoring of the rainforest is lacking.

Decades of war and political instability devastated much of the region’s infrastructure. As Mahli points out, when referring to DRC: “All the weather stations that were there declined in the 1960s and 70s. The region is a real unknown in our scientific understanding.”

Abernethy agrees: “There is almost no weather data collection going on in Africa. The truth is we don’t how much climate change is affecting the forests.

“I work with colleagues in South America and the Amazon basin is monitored to death. But it’s really hard to find empirical data on Africa. It’s shocking.”