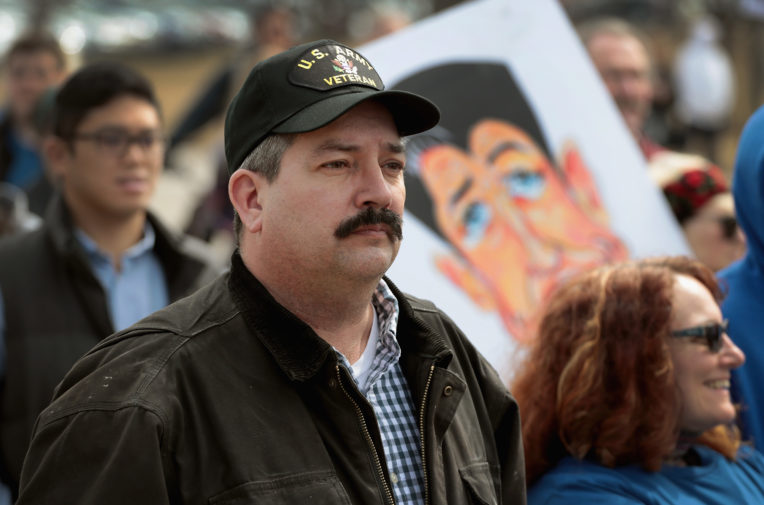 Meet Randy Bryce, the ironworker running for Congress in Speaker of the House Paul Ryan's district on a progressive environmental platform

Meet Randy Bryce, the ironworker running for Congress in Speaker of the House Paul Ryan's district on a progressive environmental platform

Even before Paul Ryan’s sudden announcement that he wouldn’t seek re-election this year, the ironworker looking to take his Wisconsin seat told Unearthed the speaker was “running scared”.

“I don’t blame him. He’s never had to face what we’re bringing,” Randy Bryce, who is running for Congress in Wisconsin, says in a phone interview. “From the get-go, we said our intent was to replace Paul Ryan with a working person. We need more working people in Congress: we have enough multimillionaires. It doesn’t matter what Ryan does. Our intent is to put an ironworker in Congress come November.”

Ryan’s decision to not seek re-election has caused alarm for Republicans, already fearful of a Democratic wave in the autumn. But even before he announced his departure, members of Congress told Bryce – better known by his Twitter handle “Iron Stache” – that he presented the most serious electoral challenge to the speaker in two decades. He says an internal poll from December showed him six percentage points behind Ryan, and Bryce says that lead evaporated when a short bio of the candidates was included next to their names.

Now without one of America’s most powerful politicians to run against, the path to DC looks far easier, even if he has to negotiate a primary against Cathy Myers, a teacher, in August.

More on the midterm elections

“This is a people-powered campaign – we have hundreds of volunteers ready to hit the doors,” he says. “The first district doesn’t know what’s coming. Be prepared. To the billionaires and the special interests: your time is coming to an end.”

Speaking to Unearthed days before Ryan announced he will leave Congress this autumn, Bryce says Democrats can gain ground on Republicans on the issue of climate change, and revitalise communities like his in the process.

His platform, which includes a “Green New Deal”, no new oil pipelines and a pledge to prosecute ExxonMobil for “lying to the public” over climate change, has won praise from environmental activist Bill McKibben.

“The building trades get a bad rep because we’ll work on projects that aren’t always the best for the environment,” Bryce says. “But it doesn’t have to be ‘either-or’ when it comes to things that help the environment. Good-paying jobs can be green jobs.”

He continues: “The ironworkers’ union I belong to wrote the book on how to put up wind turbines. But after Governor Scott Walker came into Wisconsin he made sure turbines weren’t built in this state anymore… We know the direction we need to move in. It’s just about getting the government to move with us.”

On his site, his campaign team boasts about how, as an ironworker, Bryce turned down work on a new pipeline saying “he wouldn’t feel comfortable” working on a job like that.

Bryce says his emphasis is on shifting to sustainable energy rather than simply telling construction workers not to take fossil fuel jobs.

“I’m not aware of any new pipelines being built right now. People just want to earn money to keep a roof over their heads. That’s why we need to offer new types of jobs which are friendly to the planet and we need to be the ones to take the lead on this before someone else does.”

It’s easy to see Wisconsin’s first district, where Bryce is standing, as a model for understanding the political landscape of Trump’s America. A mix of former manufacturing cities, suburbs and rural farmland, stretching along the state’s border with Illinois, the area was a union stronghold until the motor-industry jobs largely disappeared at the turn of the century. In 2016, Trump carried it by 10 points, winning over working-class voters who had gone for Obama, previously.

For a Democratic party experiencing an identity crisis after Trump’s election, Bryce came around at exactly the right time.

A union activist with only limited experience running for local office in his home state, the campaign video announcing his campaign electrified liberal America.

Wearing a hard hat, he looked down the camera and addressed Paul Ryan directly:  “Let’s trade places… You can come work the iron, and I’ll go to DC.”

Since then, money and support have poured in from across America. Bryce says his campaign outraised Ryan’s by $1.75m in the first three months of 2018, rejecting corporate, fossil fuel and Wall Street money in favour of small donations.

In a recent profile, Mother Jones wrote that his popularity was linked to “inescapable cultural anxiety” about the state of the party. Another writer described him as “human Springsteen song”.

By the time pictures were published of Bryce getting arrested for protesting outside Paul Ryan’s office against Congressional inaction on the Deferred Action for Childhood Arrivals (Daca) programme, Democrats had decided that Bryce, the living embodiment of the white, working-class voters they need to win back, was their guy.

“We can win by being honest,” Bryce argues. “There are some members of my union that voted for Donald Trump and they know I’m going to give them a hard time for it. So I ask them, can you name one promise Trump made you that he’s kept? It’s very clear that Trump had no intention of keeping [his promises]. I have a trouble of believing anything that comes out his mouth.”

That extends to Trump’s pledge to introduce steep tariffs on Chinese steel imports.

“If we could do something to keep China from dumping steel on the US, that would be great. I just don’t think Donald Trump is the right person to figure that out.”

Bryce, who has an 11-year-old son, says having a child has helped shape his politics. “It has a lot to do, not just with the environment, but all that I do. I want him to have a good future. I want his friends to have a good future. You’re seeing so many voices that have been silenced for so long being more engaged than ever. Making our planet a more livable place is a big part of the reason I’m running for Congress.”

With seven months to go before the election, and without Ryan to contend, the “Iron Stache” is optimistic.

“It’s surreal at times, for sure. But the people who have come up and talked to me have been very supportive,” he says. “Unless they’re from Paul Ryan’s camp. You can judge a person by the enemies they make and I’ve made some pretty powerful enemies. That tells me I’m doing exactly what I need to do.”

This piece is also published in the New Statesman.

Unearthed does not endorse any political candidates or political parties.