Comment: Shell is on a PR offensive to convince young people it has a place in their future 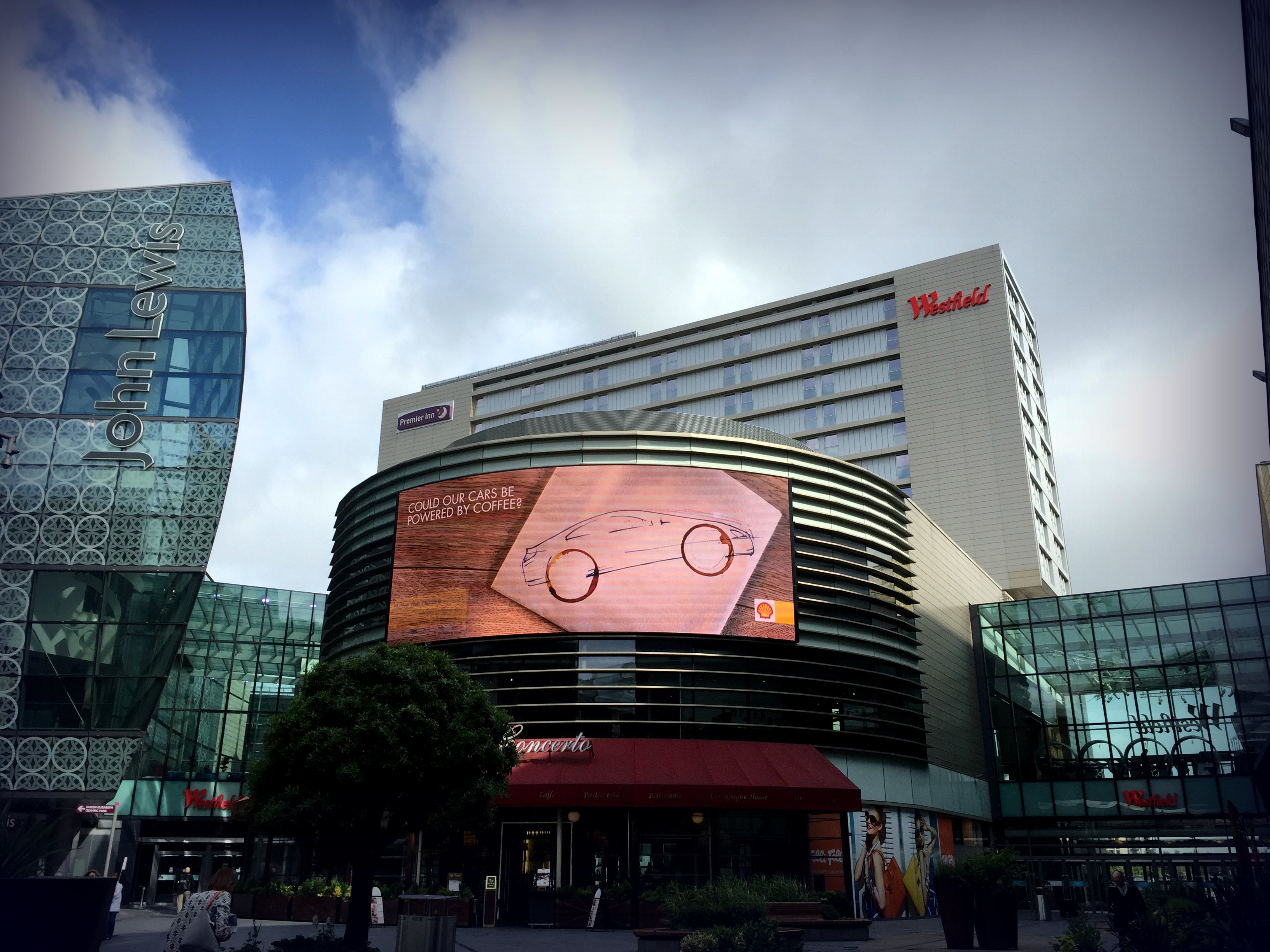 What does an oil company do when the world calls time on the oil age?

If you’re Shell, you throw a little festival. A fun family day out that sits within a broader strategy to reposition Shell’s brand – though not its actual business practices or models – in readiness for the looming global energy transition.

A leaked PR brief outlining Shell’s communications objectives for a project it calls ‘Towards Net Zero Emissions’ reveals the thought process behind the oil giant’s current communications offensive, which includes – alongside millennial-targeted video and social media content – the ‘Make the Future’ festival held at the Olympic Park in London this weekend.

The location was a smart choice. Shell could not have known for sure that their festival would take place in a city enveloped in Brexit gloom, but they hit upon a little bubble of lingering optimism left over from the 2012 Olympics that manages, in spite of everything, to still feel inspirational and international.

Lines of schoolchildren (bussed in from various London schools on Shell’s dollar, according to a staff member at the event) watched live science shows on the main stage, raced tiny cars powered by saltwater, and saw Pelé take part in a penalty shootout on a miniature pitch that generates power from the energy in footsteps. 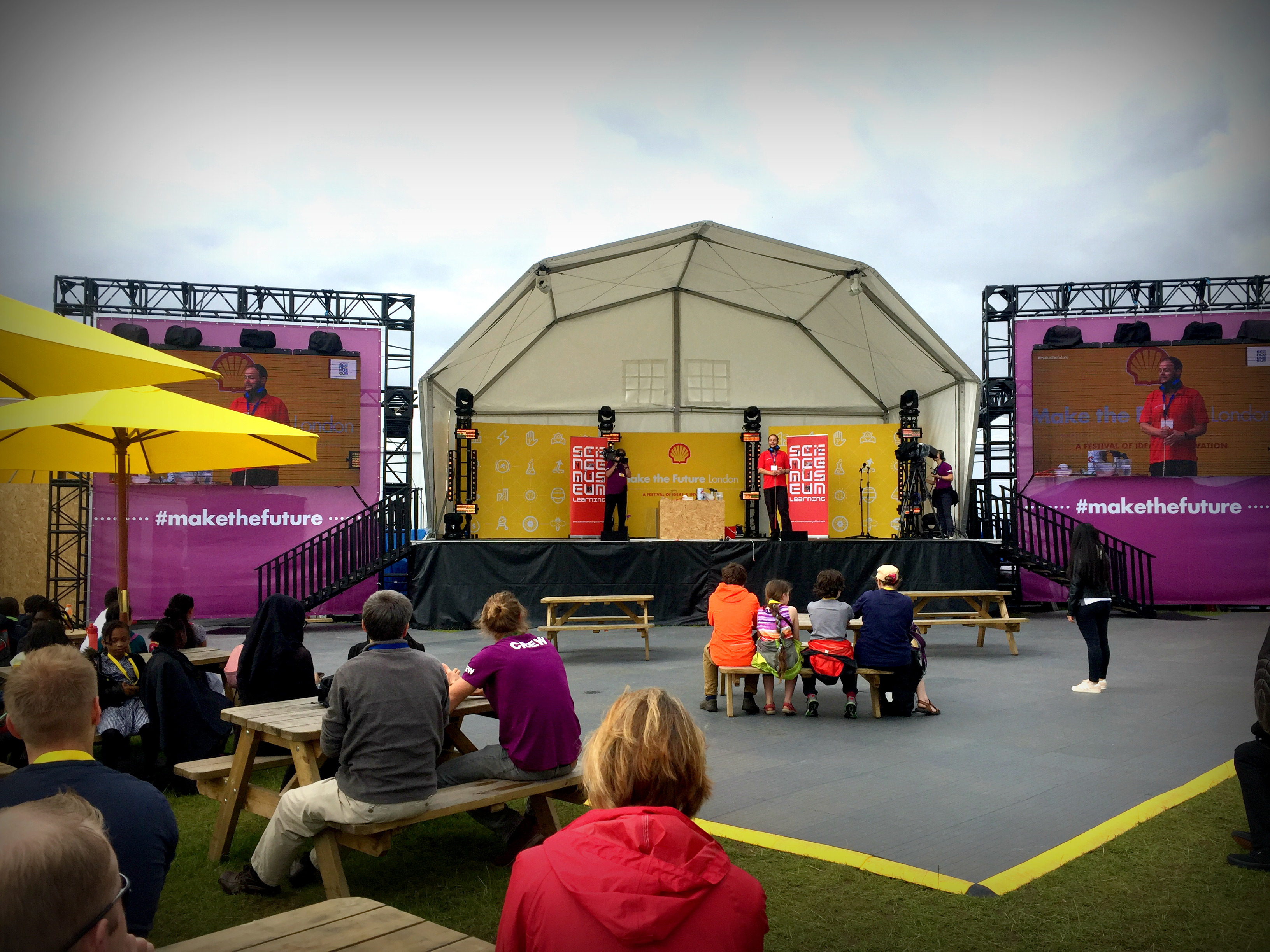 Tourists and corporate guests milled about between temporary walls that asked stencilled questions like “How can we make our journeys more intelligent?” and “How is it possible to store CO2 in solid rock?” Food stalls and interactive attractions nestled in the curves of a racetrack where teams of university and high school students from around the world competed to travel the furthest distance on the equivalent of a litre of petrol.

Read more: Shell hosted an eco-festival at the Olympic Park

All these attractions would be better described as distractions, because Shell’s festival and accompanying online content (check out the hashtag #makethefuture, if you haven’t already) are a masterclass in the art of misdirection. And this is probably just the beginning.

Shell’s whole PR strategy is sleight of hand performed by an incumbent oil giant that really doesn’t want you to pay attention to its ongoing and significant contribution to climate change. Or to the hundreds of oil spills a year it’s responsible for in the Niger Delta. Or to its recent attempts to abandon oil and gas platforms as large as the Empire State Building in the North Sea. Or its sustained lobbying efforts against electric cars. For example.

It especially doesn’t want you to think that the way to tackle climate change is something as commercially catastrophic for Shell as leaving the oil in the ground.

Nope. Shell would much rather we focussed our efforts – although our wide-eyed attention would be sufficient – on seductive but ultimately unhelpful toys like saltwater cars, coffee ground bricks …and carbon capture and storage (CCS).

“Ultimately, the content shouldn’t focus on the challenges of today, but the solutions of tomorrow”, the PR strategy says.

It crops up again in Shell’s imagining of future transport. The PR briefing conspicuously makes zero mention of electric vehicles, instead going with this (frankly absurd) option: “we get more efficient, co-owned driverless cars and transit …and we do CCS on vehicles”.

A Shell blog on that subject notes: “Whether this ends up as a viable domestic vehicle solution is not entirely the point at this stage.” Convenient, that. 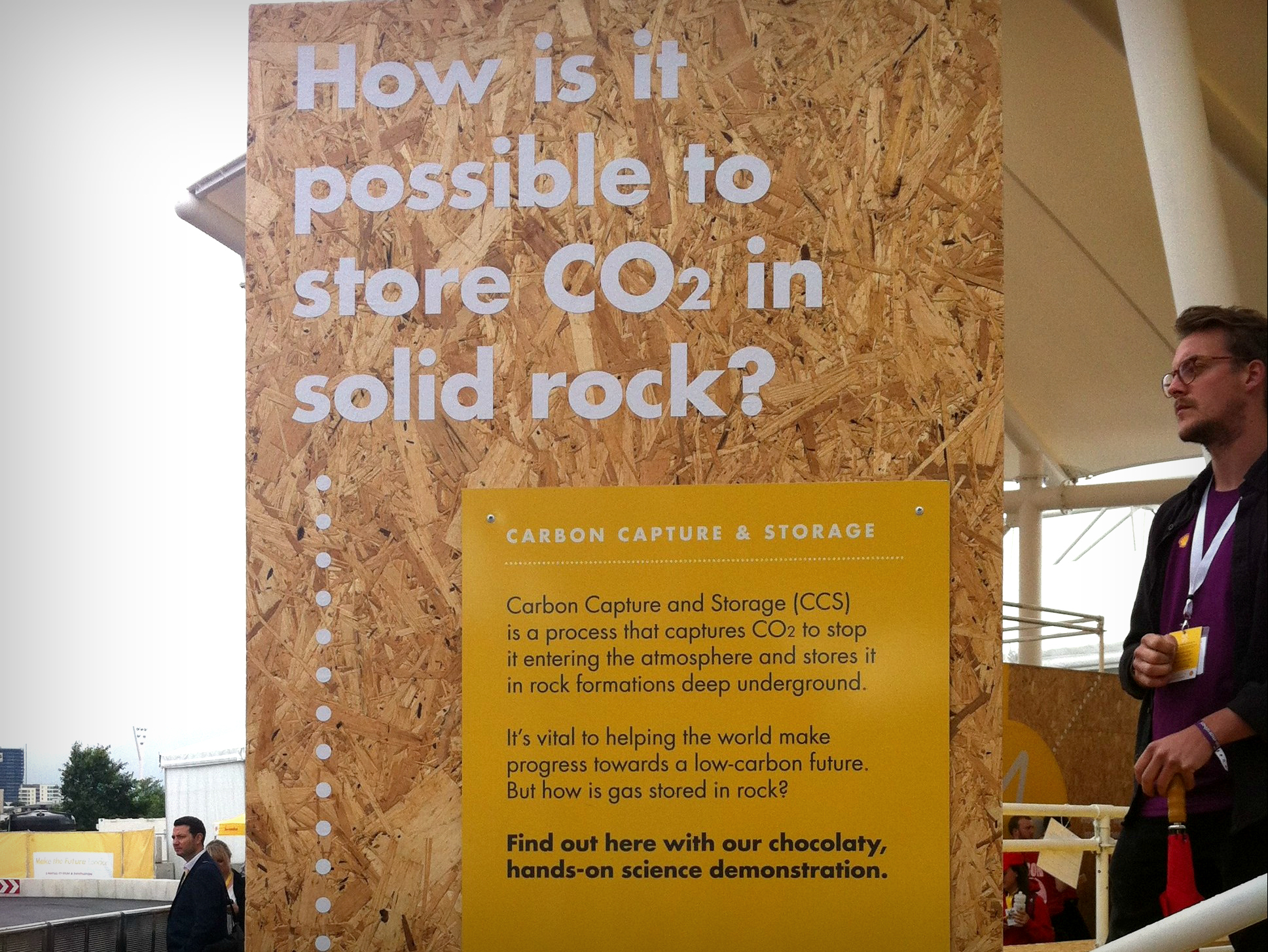 Electric vehicles also felt a little sidelined at the Make the Future festival, which espoused instead the exciting potential of cars powered by saltwater (which sadly doesn’t work for vehicles more than about two inches long).

CCS is central to Shell’s vision of the future because it allows the world to continue burning fossil fuels, sequestering carbon emissions rather than stopping them in the first place. Hence net-zero emissions. A study funded by Shell-owned BG group recently found that CCS would ‘unlock’ capacity to burn more fossil fuels. This is, obviously, a pretty big deal for fossil fuel companies.

Questions are better than answers

Their current PR assault reveals that for Shell, it’s not about reaching climate goals – it’s all about the journey (and prospective PR partners are reminded that it will be a Iong journey – so we might as well enjoy the ride, right?). This is convenient for a company that doesn’t intend to actually adapt its business to tackle climate change right now, but which needs to be seen, by shareholders as well as the general public, to be doing something. The devil makes work for idle hands and all that.

So the media Shell has been rolling out over the past couple of months places heavy focus on innovation, and the seeding of new and futuristic ideas. It’s not about finding the right answers, but about asking the most exciting questions.

Their ‘Power of Questions’ video combines this spirit of inquisition with the shimmer of celebrity and the innocence of children (not the first time Shell has tried this grim tactic), as Countdown’s Rachel Riley presents an ‘experiment’ that demonstrates how we lose the inclination to ask questions as we grow up.

I can’t help thinking Carol Vorderman never would’ve done something like this.

What is conspicuously lacking in this new narrative of journeys and questions is any mention of goals, targets, answers or achievements that are in any way measurable or quantifiable – like the dreaded 2°C target, which Shell has previously rejected as unattainable in a number of its global energy projections. It has now decided to change the topic of conversation completely, orchestrating a narrative shift that is neither accidental nor insignificant.

Will somebody please think of the millennials

The leaked brief identifies ‘Energy Engaged Millennials (EEMs)’ as a key target audience for Shell. This explains why Made In Chelsea’s Jamie Laing ‘stars’ in the uncomfortable series of shorts ‘Reverse Engineers’ on Channel 4, where tv personalities (including the aforementioned Riley) encounter exciting engineering innovations in stilted conversation with their designers. Certainly Laing wasn’t brought in for his engineering nous.

And any PR person worth their salt-powered micro-car knows online personality quizzes – such as Shell’s What do your questions say about you? – are like catnip for millennials.

They are more open-minded (in general and with respect to Shell) than older generations so engaging with them appropriately at this point to develop brand loyalty.

Their social connectivity suggests they can potential [sic] influence others and have direct and significant impact on Shell’s business. Helping them to have a more realistic understanding and stronger appreciation of Shell (and equipping them with meaningful and relevant perspectives to share) will potentially result in more positive brand advocacy.

Their underlying optimism and motivation to act for things they believe in suggest that they are a good in terms of encouraging behavioral activity.”

Shell has tried to make contact with millennials before – the results were as painful as you’d imagine. At surface level these attempts to get down with the kids are funny to watch (albeit sometimes lightly sexist), but if Boris Johnson has taught us anything, it’s that entertainment value can mask a sinister subtext.

The PR companies pitching for the Shell project are instructed in the brief to instrumentalise young people’s “underlying optimism and motivation to act for things they believe in”, as well as their online connectivity, to turn them into evangelists for the forward-thinking, futuristic and friendly fossil fuel multinational of tomorrow.

On the first page of Shell’s report ‘A better life with a healthy planet: Pathways to net-zero emissions’, a note reads: “we have no immediate plans to move to a net-zero emissions portfolio over our investment horizon of 10–20 years.”

So in spite of all the time, money and creative effort Shell has poured into crafting this new inspiring narrative and seeding its place in our future, it actually has no intention of enacting any of the solutions it peddles for at least a decade or two. Good to know.

One last thing. As you click through from Shell’s website (shell.co.uk) to the website for their Make the Future festival (makethefuture.shell), you will be met with this message: 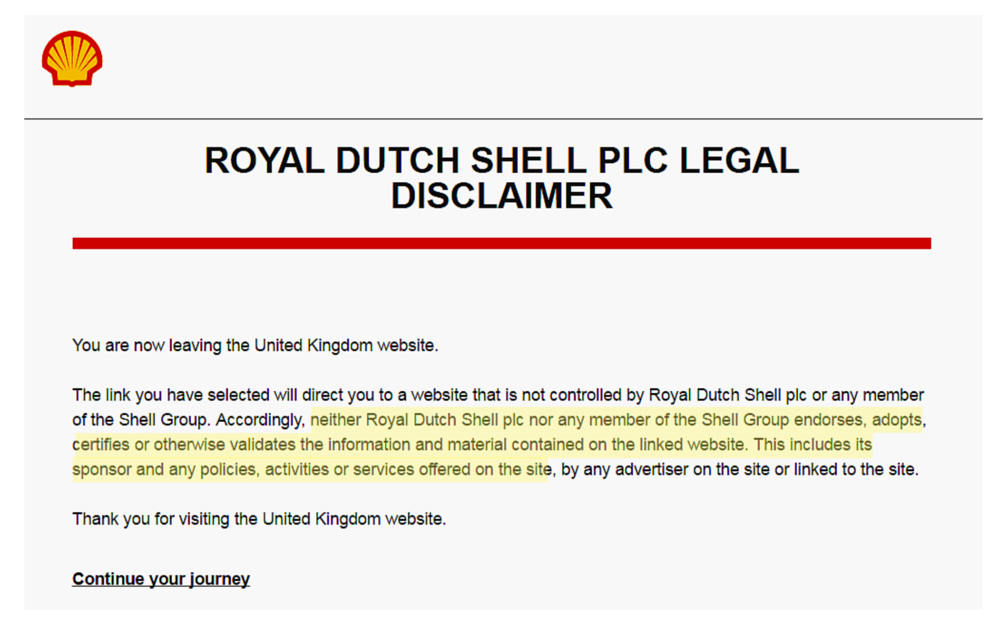 A friendly reminder that when it comes to making your future, what Shell-the-futuristic-innovator says really bears no relation to what Shell-the-century-old-oil-giant actually does.

You can read Shell’s PR strategy in full here.