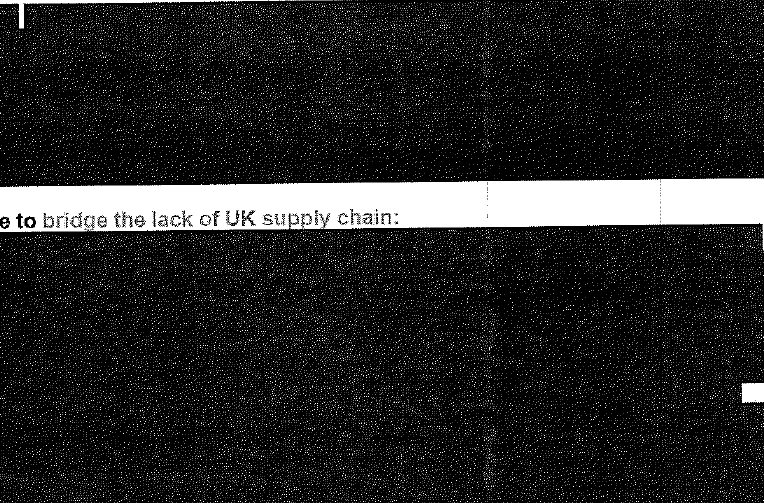 The Cabinet Office has finally released its – still heavily redacted – secret report on the fracking industry, following a 22-month Freedom of Information battle with Unearthed.

The document – produced by the Cabinet Office in 2016 but never published – confirms government and industry players were privately downbeat about the prospects for a UK shale boom, even as they talked up the sector’s potential.

Unearthed first discovered the existence of the report in early 2018, but its information request was rejected because the government claimed it “could call into question the industry’s viability.”

Following a hearing in July this year, the information tribunal ordered the government to release key extracts of the report. The government failed to comply with the order to publish on 25 November, but finally released the report late on Friday afternoon.

Though sections of the document have been unredacted, it remains heavily censored.

Jon Trickett, shadow minister for the Cabinet Office, told Unearthed: “This report clearly shows that the Tories have bent over backwards to serve the interests of big business, especially the oil and gas industry.

“The Conservatives have taken money from oil executives, trashed the rights of communities and enabled fracking companies to threaten their local environment.

“The fact they have tried to cover this up by redacting pages of critical information – like with their talks with the US over selling off parts of our NHS – further illustrates this Government’s contempt for the public.”

He added that a Labour government would ban fracking, expand the Freedom of Information act, and “introduce tough new transparency rules”.

The Conservative Party failed to respond to requests for comment.

Ken Cronin, chief executive of trade group UK Onshore Oil and Gas, said: “This 2016 report reveals no new information of interest. It is true that shale gas development in the UK has progressed at a steady pace, although this is commensurate with the exploratory and highly regulated nature of the industry.

“Since this report was [produced], the first hydraulic fracturing since 2011 has taken place, several sites have been constructed and tested across North Nottinghamshire and multiple planning applications have been submitted for further exploratory work across Derbyshire and Lancashire.

“As with any industry that involves development, our progress has been slowed by the local planning system. This is not a unique problem to shale within the energy sector. Onshore wind and solar have met with comparable delays where applications have been filed.”

The report’s release comes as the government has placed a pause on fracking, though activists fear the moratorium could be lifted by a Conservative government after the election.

Business Secretary Andrea Leadsom said the moratorium would remain in effect until “new compelling evidence is provided” regarding the serious seismic incidents drilling has triggered in the north of England.

The Department for Business, Energy and Industrial Strategy was unable to comment due to pre-election ‘purdah’.

The Cabinet Office’s report, which is based on interviews with 28 industry stakeholders, identifies “low public acceptance of shale” as the primary barrier to the industry’s progress.

This is described in the report as “public opposition driven by concerns re: local quality of life and safety, environmental protection, crowding out of renewables.”

Rather than address these concerns, however, the officials appeared to regard them as a communications problem.

The report notes that the now-defunct Department for Energy and Climate Change (DECC) was “already undertaking crucial work on communications to increase public acceptability of shale” such as the “development of pro-shale national/regional narrative” and “shale champions.”

Messages from companies were even fed into the government’s “longer term national communications efforts”.

This public opposition, the report claims, led to “a set of more practical ‘symptom’ barriers” that the Cabinet Office deliberated on how to lift.

It said: “Operators highlight that the most significant barriers by far are the long decision timelines and uncertainty experienced in local planning system.”

“Current and future operators stress that they will only bring forward large sites if current long planning times and perceived uncertainty is reduced – ie unless this can be resolved, UK shale will not take off even if geology proven.”

In response, the report discusses a range of possible measures to smooth and speed-up the permitting process for would-be frackers, including:

Unearthed’s discovery of the report nearly 2 years ago related to government’s internal projections for the the growth of UK fracking, which turned out to be far more conservative than the vast number of wells and wealth the industry had predicted.

There is much in the Cabinet Office’s report that indicates government and industry players understood these growth forecasts could well be overblown, and the long-term viability of UK fracking remained unproven.

“The development of the UK shale industry over the next 5-10 years is subject to great uncertainty – most importantly because the viability of the UK shale reserves is not yet proven,” the report states.

It goes on to reference interviews with operators and industry experts that “suggest that the industry could close down quickly if early sites are unsuccessful. Developments in the next 5-10 years are therefore crucial to establish long-term viability of the industry.”

The extent of the detail provided in the report is that government expected 5-10 horizontal wells could by fracking by 2020, “with a realistic expectation being significantly closer to 5 than 20.”

With less than a month to go before 2020, we now know that even the government’s “realistic expectation” was excessively optimistic. There are currently no fracking sites producing gas in the UK, and the government has announced that it will not support future projects.

The revelations scattered through the report, however, should not distract from the fact that the Cabinet Office’s report remains heavily redacted.

37 of the 48 pages are fully censored and many of the others contain significant redactions.

The ‘background’ page is effectively free to read and so to are major extracts of the executive summary, and the occasional line from the report’s body.