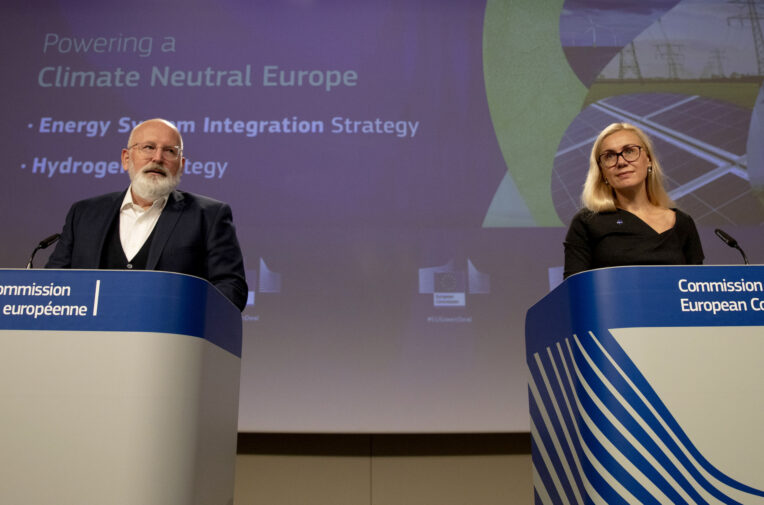 Europe’s farming and chemical lobbies attempted to weaken new EU targets to halve pesticide use by 2030, according to documents obtained by Unearthed.

At a meeting in March, the European Crop Protection Association – which represents some of the world’s biggest pesticide producers – suggested to European Commission (EC) officials the target was double what could be achieved in the next decade.

It came after the influential farming lobby group Copa Cogeca warned the man in charge of the EC’s European Green Deal plan – Frans Timmermans – that its pesticide reduction ambitions were “too high” and would “drive farmers out of business”.

As part of its much-touted Green Deal, the EC announced in May that it intended to cut pesticide use – and the risk posed by its use – by 50% over the next ten years.

In addition to opposition from trade groups, Unearthed also found instances of individual pesticide companies pushing back against this planned target. These included the German agrochemical giant Bayer, which argued, in its response to an EU public consultation, that Europe should set targets to reduce the risk of pesticides, not to reduce their use.

Martin Hojsík, a Renew Europe MEP for Slovakia, told Unearthed: “Even industry is admitting that we have a pesticide risk problem. But instead of becoming the champions of integrated pest management and other nature-friendly solutions, they are sticking to what they have always done: trying to water down the environmental and health objectives and regulations.”

“It is time for these companies to transform otherwise they will be losing the innovation battle because we cannot afford to lose our health and biodiversity anymore,” he continued.

What is the EU's Green Deal?

The European Green Deal is the European Commission’s plan for the EU to achieve carbon neutrality by 2050. It includes raising the bloc’s 2030 climate target, a biodiversity strategy to protect fragile ecosystems and Farm to Fork, a plan to make food production more sustainable — including a reduction in pesticide use.

In May, the European Commission announced its intention to halve the use and risk of pesticides, while also reducing the use of fertilisers, antibiotics and increasing organic farming. The targets are currently non-binding, but it is possible binding targets could be set in legislation.

According to notes from a 30 March meeting, the European Crop Protection Association (ECPA) told Catherine Geslain-Lanéelle, then deputy to the EU’s Agriculture Commissioner that the pesticides target was not “realistic”.

The notes continued: “On the basis of projections concerning the products which will hit the market and those for which the authorisation will not be renewed between today and 2030, the crop protection industry considers that a reduction of 25% of the use of chemical pesticides, whatever the risk of their use, is achievable by 2030.”

In response to a query from Unearthed, ECPA director general Géraldine Kutas said: “In these meetings, we mentioned that we are open to discuss a reduction target for pesticides use and risk but we have questioned the scientific basis of the 50% reduction target.”

She added that the ECPA “didn’t mention pro-actively a specific number for the reduction target,” but “when asked by the Commission about what we think would be achievable we told them that we consider that a reduction of 25% would be achievable by 2030, as a result of new innovation arriving to the market and older chemistry being removed.”

One month previously, the major European farming lobby group Copa Cogeca (CC) also pushed back against the plans at a reception held with Frans Timmermans, the EU’s Vice President for the Green Deal.

According to internal Commission emails following the event, which was attended by the 70 presidents represented by CC, “many of them also pointed out that the ambition of the [European Green Deal] is too high (pesticides were mentioned) and will drive farmers out of business”.

Erik Millstone, Emeritus Professor of Science Policy at the University of Sussex, told Unearthed:  “There is plenty of evidence that current levels of use of pesticides are harming biodiversity, water quality and public health. There is also lots of scope for the reduction of pesticide use, though it’s difficult to know the magnitude of the scope until you try.

“Unless you set a target and try to achieve it, you definitely won’t achieve it. It’s good to set a challenging target and then try to meet it. If the EU only sets a target that the pesticides industry is happy with then it will be a poor target indeed.”

Meanwhile, in its response to the EU’s consultation on the plans on 16 March, Bayer stated that it had committed to cut the overall environmental impact of its products by 30%, rather than cut their use.

The EU’s plans to cut agrochemical use are part of the European Green Deal, a sweeping new policy programme that has been promoted as the EU’s attempt to achieve economic growth while addressing the ecological and climate crises.

But the plans still face hurdles before they can take effect: the Commission has to turn the policies into legislative proposals and agree them with EU member states and the EU’s parliament.  Member states will then have to implement the changes and some may oppose them. There will be further opportunities for companies and lobby groups to attempt to influence this process.

It has also been suggested that the targets could be changed in the future, with Agriculture Commissioner Wojciechowski saying this summer that “these objectives would have to be revised” if they are shown to threaten food security or undermine competitiveness of Europe’s agriculture sector.

Toxicologist Dr Angeliki Lyssimachou, of campaign group Pesticide Action Network Europe, told Unearthed: “These targets are the EU’s vision, but it is not yet clear how they will be implemented or measured. Member States must now promote sustainable agricultural systems that do not depend on the use of chemical pesticides. These agri-industry lobby groups will still create obstacles or argue that their products are actually safer and that the risk has been reduced.”

A Commission spokesperson told Unearthed: “When it comes to the targets, we will of course take the situation of individual Member States into account and analyse the impact nationally when proposing binding targets – the overall target is 50% for the EU as a whole. To achieve this, we will support our farmers with alternative tools for crop protection, including revising the Sustainable Use of Pesticides Directive, enhance provisions on integrated pest management (IPM) and promote greater use of safe alternative ways of protecting harvests from pests and diseases.

“The public consultation on this has already been launched. We will be discussing with each Member State individually and make country specific recommendations by the end of this year to support them to achieve the ambitious objectives we have set out and reflect this in the Common Agricultural Policy strategic plans. Again, these targets are ambitious, but they are achievable, if we all, institutions, Member States, farmers and the industry, work together.”

In the documents, the ECPA also lobbied against the EU’s stringent rules on the pesticide residues that are permissible on food imported into the EU – which are known as maximum residue levels (MRLs).

The issue has been contested for some time, with trading partners complaining to the World Trade Organisation that the EU’s approach is too cautious and doesn’t reflect scientific evidence or standards elsewhere in the world.

In a letter to the Secretariat General of the Commission on 12 March, the ECPA wrote that: “EU MRLs setting should be based on risk assessment in all circumstances, in compliance with the [World Trade Organisation Sanitary and Phytosanitary Standards] agreement and aligned with international standards. Such an approach could be implemented in a fairly straightforward way, without the need for legislative change.”

Two weeks later the ECPA sent a similar letter to Catherine Geslain-Lanéelle, then deputy to the EU’s Agriculture Commissioner, taking issue with the EU’s “current policy to automatically delete MRLs” for a pesticide when it is no longer authorised for use within the EU.

This means that if a pesticide is banned in the EU the amount of the pesticide permitted on products must be below the level of detection, unless an exemption is made.

The ECPA added that revising this approach was “crucial” for Europe’s meat industry, which is “highly dependent on high protein feed import”. Much of the imported soy consumed animals to fuel the global meat industry is grown using pesticides banned in the EU.

Earlier this year, an investigation by Unearthed and Public Eye found demand for animal feed was driving hazardous pesticide sales. In the $23bn worth of global sales data from 2018 analysed, soya – grown largely as animal feed – made up by far the biggest market for all pesticides, as well as those categorised as highly hazardous.

In their consultation response, agrochemical manufacturer BASF wrote that: “Moving to 100% organic farming would result in an increase of greenhouse gas emissions if the area of agricultural production land had to be increased to compensate for reduced productivity”.

Their statement is based on a Cranfield University study published in Nature last year that such a wholesale conversion would result in a 40% drop in food production.

However, the EU is only proposing that organic farming covers a quarter of agricultural land by 2030.

Both the ECPA and Bayer wrote that organic farming comes with “ecological trade-offs”.

In a position paper on the new proposals from January this year, the ECPA wrote that these trade-offs include: “an increased overall volume of pesticide use in Europe as some products commonly used in organic agriculture need to be applied in much larger quantities than low rate chemical alternatives, more agricultural land is needed to maintain the same level of productivity and more greenhouse gas emissions are likely due to more interventions in the fields.”

Millstone, of the University of Sussex, told Unearthed: “What matters is not the overall volume of pesticides applied but their toxic effects on the farm workers who apply those products, people affected by spray drift, the flora and fauna in the environment in which those crops are grown, and on the consumers of the foods to which the pesticides are applied. “

“Moreover if research and development budgets were transferred from chemical farming to organic or agroecological farming, their productivity could be expected to improve significantly.”

Kutas told Unearthed that the ECPA supports the Commission’s “aim to increase organic production in Europe in order to meet growing consumer demands” but “we alerted that it comes with ecological trade-offs that should be considered.”

A Bayer representative told Unearthed: “Bayer welcomes the EU Green Deal.  With our products, we aim to reduce the environmental impact by 30 percent by 2030 whilst advancing digital farming technologies, biologicals and better seeds. And we have set ourselves the ambitious goal of becoming carbon neutral in our operations by 2030.

“Agriculture production needs to meet the demands of a rapidly growing population. Crop protection against weeds, insects and diseases is crucial to produce enough on less land.”

“We support the Commission’s aim to increase organic production, as long as it is driven by growing consumer demand and does not lead to unintended land use changes in other parts of the world that might have substantial detrimental effects on biodiversity and climate.”